One World: Together at Home – Everything you need to know

What is it, what is it for, which stars are playing, where can I watch it and more 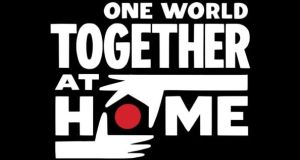 One World: Together at Home takes place on Saturday, April 18th, and a two-hour show will air on RTÉ on Sunday

What is One World: Together at Home?

One World: Together at Home is a lockdown concert for a lockdown world. Some of the biggest artists in the world will play from their own home to a global audience and all funds raised will go to the World Health Organisation Solidarity Response Fund to fight coronavirus. The money will go toward funding personal protection equipment (PPE), testing kits and laboratory capacity to process the tests, especially in the developing world. It’s been described as the Live Aid for the digital generation.

If it is this generation’s Live Aid, who is its Bob Geldof figure?

Its Bob Geldof figure is another Irishman. Unlike the sweary, in-your-face Geldof, Tipperary-born Declan Kelly, the low-profile executive producer of One World: Together at Home, is unlikely to be gesticulating onscreen, telling viewers “give me your money. I want your f***in’ money now”. He’s a former journalist turned multimillionaire founder of Teneo, the New York public relations and corporate consultancy. He’s also the brother of Alan, the newly-elected leader of the Labour Party.

How did the concert come about?

The original idea for the concert came from Kelly and Hugh Evans, the chief executive of Global Citizen, a New-York based nongovernmental organisation that seeks to end extreme poverty in the 59 poorest countries in the world by 2030. Kelly is on the charity’s board and his company has partnered with Global Citizen on many previous initiatives. They approached Lady Gaga, who had been involved with fundraising for Global Citizen in the past, to seek her advice on how such the “ concert” could be held. When Kelly and Evans called her they found her self-isolating at home as she suffers from fibromyalgia, a condition that affects the nervous system and causes chronic pain. By the end of the conversation, Lady Gaga was on board as curator of the event.

Who will be taking part in it?

It will be broadcast on many networks in the US first between 8pm and 10pm (EST; 1-3am Irish time) on Saturday night/Sunday morning. Hosts for the evening are three of the big beasts of US television, Jimmy Fallon of The Tonight Show, Jimmy Kimmel of Jimmy Kimmel Live and Stephen Colbert of The Late Show.

RTÉ will air a two-hour special across RTÉ2, RTÉ Player and RTÉ 2fm on Sunday, April 19th, at 7pm. The programme will feature Doireann Garrihy and Eoghan McDermott who will bring an Irish take on things.

The BBC is doing its own special with performances from Ellie Goulding, George the Poet, Jess Glynne, The Kingdom Choir, Little Mix, Michael Bublé, Rag’n’Bone Man, Skip Marley and Tom Jones. The BBC’s coverage will be presented by Clara Amfo, Claudia Winkleman and Dermot O’Leary.

Leading up to the global broadcast special on the Saturday, there will be a six-hour streamed event, curated from around the world, to support healthcare workers on the front lines.

This six-hour slot will be filled by another galaxy of stars including our own Hozier and Niall Horan. The digital stream will be available on a host of platforms including YouTube, Amazon Prime Video, Apple, Facebook, Instagram and Twitter to name but a few.

How can the public contribute to One World?

The organisers hope to raise hundreds of millions of dollars mostly from the corporate sector and high-worth individuals. Apple chief executive Tim Cook set the trend by signing a $10 million cheque live on air in a broadcast interview with Lady Gaga. Other companies which have come on board with their big chequebooks include Cisco, Citi, the Coca-Cola Company, GlaxoSmithKline Consumer Healthcare, IBM, Johnson & Johnson, Procter & Gamble, PepsiCo, Teneo, Verizon and Vodafone.