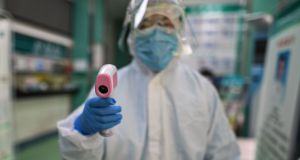 A medical worker prepares to check the temperature of a photojournalist before a coronavirus test in Wuhan on Thursday. Photograph: Hector Retamal/AFP via Getty Images

Authorities in the Chinese city where the global coronavirus pandemic began late last year have revised its death toll upwards by 50 per cent, as the government in Beijing again denied that there had been any cover-up in its handling of the crisis.

A local government taskforce in Wuhan charged with virus prevention added 1,290 fatalities to the city’s toll, taking the confirmed count to 3,869 from a previously reported 2,579. Wuhan, a city of 11 million people, suffered more fatalities than any other city in China as residents struggled get help from its overwhelmed medical system.

The revision comes after weeks of scepticism, from both within and outside of China, over the officially reported figures. Officials said Friday’s revision was the result of incorrect or delayed reporting and not because information had been suppressed.

“Medical workers at some facilities might have been preoccupied with saving lives and there existed delayed reporting, underreporting or misreporting, but there has never been any cover-up and we do not allow cover-ups,” said China’s foreign ministry spokesman Zhao Lijian at a news briefing in Beijing.

While China appears to have overcome the worst of the virus, reporting only 26 new confirmed cases, its lowest daily total in two weeks, the country is grappling with the aftermath of almost three months of nationwide paralysis.

On Friday, data from the National Bureau of Statistics showed the Chinese economy shrank 6.8 per cent in the first three months of 2020, the first such contraction since 1976 when the country was convulsed by the Cultural Revolution.

The decline, lower than analysts had expected, foreshadows the global economic fallout from the pandemic. The virus has now infected more than 2 million people globally and killed more than 140,000. China has reported 82,367 infections and 4,632 deaths across the country.

As other countries struggle with the virus, Beijing has faced mounting criticism that it suppressed early information about the outbreak, allowing the virus to spread. On Thursday, the Chinese leader, Xi Jinping, hit back in a phone call with Vladimir Putin, after Donald Trump criticised China for not sharing data more quickly.

Without referring directly to the White House, Mr Xi said politicising the pandemic was “detrimental to international co-operation”, according to state-run news agency Xinhua. The agency reported that the Russian president said “attempts by some people to smear China” were “unacceptable”.

Washington has said it is investigating the origins of the coronavirus, including the possibility it escaped from a laboratory in Wuhan, close to a seafood market where the first cluster of cases was reported.

On Thursday, Mr Zhao said: “I’d like to remind you that the WHO has repeatedly stated that there is no evidence showing the virus was made in a lab. Many renowned medical specialists in the world have also debunked the ‘lab leakage’ theory as not science-based at all.”

The French president, Emmanuel Macron, has also questioned China’s handling of the outbreak. “Let’s not be so naive as to say it [China] has been much better at handling this,” he said in an interview with the Financial Times. “We don’t know. There are clearly things that have happened that we don’t know about.”

Even as Chinese authorities over the past month have pushed to restart the economy, fears of new infections have forced some parts of the country to enact further restrictions. China has closed its borders to almost all foreigners arriving from abroad and limited international flights.

As the number of new infections in Wuhan has dropped, the city has come out of its lockdown and residents have begun picking up the cremated remains of their relatives. Photos of thousands of urns being delivered to families prompted speculation on social media about the real number of deaths, and many residents doubt the government reported figures.

Citing the number of patients who had died at home before reaching hospital, as well as late and inaccurate reporting, Wuhan’s taskforce on virus prevention and control said on Friday: “Every loss of life during the epidemic is not just a source of sorrow for their family, but for the city as well. We would like to send our sincere sympathies to the families.” – Guardian