The Rolling Stones become the latest act to sign up for One World: Together at Home 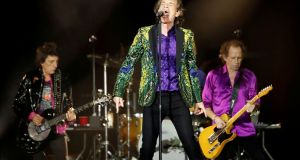 The One World: Together at Home series of online concerts is set to raise more than $100 million (€91 million) to help the World Health Organisation (WHO) fight the Covid-19 pandemic, its organisers believe.

The concerts, which will be streamed online and broadcast live in the US and then in Europe over the weekend, are being curated by Lady Gaga, while its executive producer is Tipperary-born Declan Kelly, the chief executive of public relations and consultancy firm Teneo.

It will feature a who’s who of contemporary artists and some of rock n’roll’s most enduring performers. The latest to sign-up has been The Rolling Stones.

The organisers say more than 100 acts have been confirmed, among them Irish musicians Picture This, Hozier and Niall Horan. Other artists asked to participate, but were turned away because no slot was available for them to play.

Those who are participating will play from their homes or home studios. Some artists will be pre-recorded but the main ones will play in the two-hour live special which will be broadcast on all the major US channels on Saturday night into Sunday morning Irish time.

The special will then be shown on both Irish and British TV on Sunday night starting at 7pm. There will also be a six-hour live event on most streaming platforms from 7pm Irish time on Saturday night.

“It’s going to be absolutely incredible. It will be the biggest cause-related event ever held online. We will raise a lot of money,” a spokesperson for the event said, adding, “To raise this kind of money without anybody going anywhere and to do it all online has never happened before.”

The original idea for the concert came from Kelly and the chief executive of Global Citizen, Hugh Evans. Global Citizen is a New-York based nongovernmental organisation that seeks to end extreme poverty in the 59 poorest countries in the world by 2030. Kelly, a brother of Labour Party leader Alan, is on the charity’s board and his company, Teneo, has partnered with Global Citizen on previous initiatives.

It will raise funds for the World Health Organisation Solidarity Response Fund to fight coronavirus. The money will go toward funding global personal protection equipment (PPE), testing kits and laboratory capacity to process the tests.

One World:Together at Home was organised before US president Donald Trump announced this week that he was going to halt US funding for the World Health Organisation (WHO).

The organisers believe the support of so many artist and corporations will show that the WHO retains the confidence of most people.

Central to the success has been the presence of Lady Gaga as the figurehead of One World: Together at Home. She has been cajoling artists to participate in the event from her home in New York where she has been self-isolating since the pandemic started.

In advance of the concert, Mr Kelly issued a statement saying the One World: Together at Home special will “truly be a historic event.”

Dublin band Fontaines DC: The New York Times is raving about them
9