A tale of two boats: teenager missing as countries close their ports 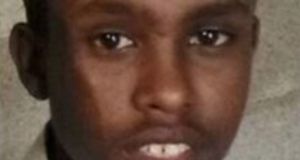 One week after trying to cross the Mediterranean, there has been no sign of 16-year-old Yahya, a football fan with a strong work ethic. 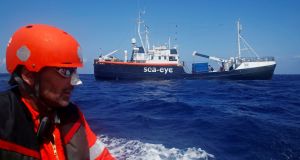 A crew member of the German NGO Sea-Eye migrant rescue ship Alan Kurdi takes part in a training exercise while on their way to the search and rescue zone in the western Mediterranean Sea. Photograph: Reuters/Darrin Zammit Lupi

Last week, Fuad – an Eritrean refugee in Sweden – got a message from his 20-year-old brother saying he was going to try to cross the Mediterranean Sea from Libya.

“I don’t have any information about him,” Fuad messaged The Irish Times two days later, on April 11th. “I’m so worried.”

About 98 people had set out together – all men and boys. They were desperate after a previous failed attempt to leave the country where they had been extorted, incarcerated and brutalised. “The boat was plastic,” Fuad said, sounding frightened.

On Monday, April 13th, Fuad received good news. “My brother is now in Italy, ” he messaged through WhatsApp, sending a photograph of a rubber dinghy in Pozzallo port, Sicily, his brother marked with a yellow star. It had sailed all the way to Europe, a journey of roughly 450km, without intervention or rescue.

The day after Fuad’s brother left Libya, a 16-year-old Somali called Yahya called his brother, Nour, in Tripoli, to say he was attempting the Mediterranean crossing. With him were mainly other Somalis, as well as Sudanese and Bangladeshis, he said. Their smuggler wouldn’t confirm how many passengers would be on board in total, and it was unclear if there was a satellite phone they could use if they needed rescue.

One week later, there has been no word about what happened to Yahya – a football fan with a strong work ethic, as Nour described him.

On Sunday, German search-and-rescue charity Sea Watch said there had been a shipwreck, after a deflated boat was spotted adrift. “Europe left them alone: to die on Easter. Again,” the charity tweeted.

Frontex, the EU’s external borders agency, questioned this, saying the boat was probably left over from a previous rescue mission, as it “did not have an engine and there was no sign of people on the boat or nearby”.

At least 20,000 men, women and children have died in the Mediterranean Sea since 2014, though activists say the real number is probably much higher. This week, 12 people perished after a boat was left stranded at sea for days – some died of thirst, others jumped overboard to try to reach a merchant ship, and others took their own lives, according to survivors, who were eventually returned to Libya.

“European governments must stop using the Covid-19 pandemic as an opportunity to enforce deadly migration control policies,” said international medical charity Médecins Sans Frontières in a statement on Friday, calling treatment of refugees and migrants over the Easter weekend “grotesque”.

His hope fading, Nour continues to scan online newspaper articles, photos, and anything else he can think of for signs of Yahya. “Don’t hide [it from] me please if you hear bad news,” he messaged this week. “I just want to find my brother.”

1 Hotels, retail, hairdressers, gyms, churches to open next Tuesday, followed by restaurants and gastropubs on Friday
2 Exiting Level 5: What will reopen and when will it happen?
3 Forget Black Friday, welcome to Green Friday - 30 Irish retailers with great deals
4 Child (4) stranded on Luas platform when separated from mother, court hears
5 400 – yes, 400! – Irish retailers for all your online Christmas shopping
Real news has value SUBSCRIBE