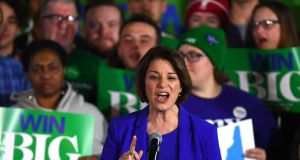 Democratic presidential candidate senator Amy Klobuchar at her New Hampshire primary: her surprise third-place performance was one of the takeaways from it. Photograph: Gretchen Ertl/Reuters

Jonathan Cooper never lost faith. The Democratic voter from Portsmouth, New Hampshire knew he would vote for Amy Klobuchar after the Minnesota senator announced her candidacy in a snowstorm in Minnesota a year ago.

“She’s down-to-earth, she’s real, she’s tough,” he says above the din of supporters at her election party in Concord, New Hampshire. “Since this summer, the media has talked about four candidates, and she’s been inching up – now they have to sit up and listen.”

Klobuchar’s surprise third-place performance was one of the takeaways from Tuesday’s New Hampshire primary. It also offered some comforting trends for those searching for certainty in this unpredictable race.

Firstly, it debunked the theory that debates don’t matter – a significant number of voters cited Klobuchar’s performance in Friday night’s ABC debate as a reason for their decision. Secondly, more than half of voters made up their minds in the last few days of the campaign, a trend that benefited Klobuchar.

But apart from the “Klomentum” factor, this primary raised as many questions as answers. As the dust settles on the Iowa and New Hampshire selection races, Democrats are as unclear as ever as to who will be their candidate to take on Donald Trump in November’s presidential election.

Ostensibly, the winner of the night was Bernie Sanders. The Vermont socialist, who lost the 2016 Democratic nomination to Hillary Clinton in one of the most bitter inter-party fights in recent memory, showed his detractors and the Democratic establishment that he is back with a bang.

However, his victory was less emphatic than his supporters would have wished. Ultimately, former South Bend, Indiana mayor Pete Buttigieg made significant strides in the week after Iowa, finishing less than 4,000 votes behind Sanders. At 25.8 per cent, Sanders’s share of the vote was well down on his 60 per cent share of the New Hampshire primary vote in 2016, when he emphatically beat Clinton. Though indicative of the crowded Democratic field, his lower share dampens any claims that this is his race to lose.

It also points to a continuingly fractured Democratic party, with no commanding figure laying claim to more than 30 per cent of the vote.

But there were some indications that the field could significantly narrow in the coming weeks. While Andrew Yang and Michael Bennet both ended their presidential bids on Tuesday, serious questions also surround the candidacies of Elizabeth Warren and Joe Biden, who finished fourth and fifth respectively.

Warren was gracious in her speech, congratulating Klobuchar in particular for “showing just how wrong the pundits can be when they count a woman out”.

Although the Massachusetts senator told supporters and donors she intends to fight all the way to Super Tuesday on March 3rd, privately many are wondering how long she can stay in the race. Warren had invested a formidable amount of time and effort in the early voting states of Iowa and New Hampshire – her disappointing performance in both states could doom her candidacy.

Former vice-president Biden is also fighting a rearguard action as he tries to keep his faltering campaign on track. His early departure from New Hampshire on Tuesday to instead attend a campaign event in South Carolina underlines how his entire campaign is now hinging on the southern state, which holds its primary on February 29th.

With African-American voters constituting more than half of the Democratic electorate in South Carolina, a decisive win for Biden is essential there. But before then, the more immediate question will be if he can keep donations coming in, particularly if he underperforms in Nevada on February 22nd.

The continuing fluidity of the Democratic race may also benefit Mike Bloomberg, the New York billionaire who sat out the early races in the expectation that the vote would remain fractured, Biden would struggle and he could swoop in and assume the moderate mantle.

With the primary race developing just as he planned, he could be in a strong position on Super Tuesday. Should Buttigieg and Klobuchar fail to build on their momentum in the more racially diverse primary states still to come, the race could come down to Sanders versus Bloomberg – two towering figures who believe they have what it takes to beat Trump in November.