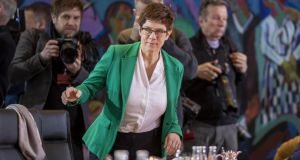 A dispute is growing in Germany’s leaderless ruling party, the Christian Democratic Union, over whether to agree on a new party chairman within weeks – or months.

On Monday, CDU leader Annegret Kramp-Karrenbauer, in the job for 14 months, announced her intention to stand down and indicated there was “no rush” to find a successor. He or she could be installed in December, she said, after a vote at the scheduled CDU party conference.

Just three days later, in a final demonstration of her lack of authority, senior party officials have questioned her envisaged timetable.

Their fear is that months of political drift, combined with a leadership vacuum, could destabilise further a party undergoing its worst political turbulence since an illegal donations scandal in 1999.

Ralph Brinkhaus, head of the CDU parliamentary party, said a new leader was needed “quickly” and that the December timetable was not carved in stone.

“When things change along the way, we have to see where the road takes us,” he said. “We may be conservative but we’re also flexible.”

Party officials are mindful of growing concerns over whether Germany’s six-month EU presidency, looming in July, can move on the EU agenda with a lame-duck chancellor and a leaderless CDU.

They also conceded that, since the September 2017 federal election, at least 16 of the last 29 months have seen Germany’s political agenda dominated by crises in the ruling coalition parties.

Seven months after Dr Merkel was sworn in for a fourth term, following coalition talks lasting six months, the chancellor announced her decision to stand down as CDU leader. A two-month leadership race ended in December 2018 with a narrow victory for Ms Kramp-Karrenbauer.

Six months after she took office, in June 2019, her Social Democratic Party junior coalition partner in Berlin saw its leader quit. The second half of last year saw the centre-left party distracted by debate and roadshows, leading to a new leadership duo confirmed last December. Just 10 weeks on, the CDU is once more facing into a leadership race that may yet become a full-blown identity crisis.

As CDU leaders disagree on whether they first need a new lead candidate for the 2021 election, or new policies to win it, even political allies have warned of further bouts of navel-gazing.

“Political leadership . . . only happens when you have ideas rather than staring at the snake like a rabbit,” said Mr Söder to the Frankfurter Allgemeine daily on Wednesday, demanding the CDU/CSU alliance clarifies its policies “in the coming days and weeks”.

“It’s not just about quickly naming a chancellor candidate. Even more important is clarifying with which programmatic and intellectual convictions the CDU/CSU wants to lead Germany into the next century.”

A new CDU party programme has been announced for December’s conference but, with work already behind schedule, senior party member Wolfgang Schäuble wants that work to come first before the party chooses Ms Kramp-Karrenbauer’s replacement at the year-end party gathering.

He framed the CDU’s struggle on leaders and policy as part of a wider crisis of Germany’s political system.

“In the last years we had too little argument . . . and instead tried to tie off everything in a 250-page coalition agreement,” he tells Die Zeit weekly. In a swipe at Dr Merkel, he said German politics lacked “dispute, alternatives and decisions. For that you need leadership and charisma.”

Just how quickly the CDU finds a leader may depend on whether the main leadership hopefuls decide to compete for power – or carve it up between them.

To expedite the succession, speculation is growing that Mr Laschet may offer his two rivals prime posts in a new CDU front bench or cabinet.