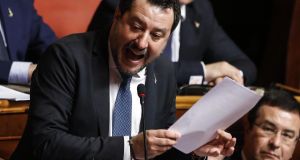 Italy’s senate has voted to strip Matteo Salvini, leader of the right-wing League party, of his legal immunity, paving the way for the former interior minister to be prosecuted for blocking a ship carrying migrants from entering Italy last year.

The decision sets up a possible trial that would be politically charged – giving Mr Salvini a high-profile platform to present himself as a champion against illegal migration.

Italy’s complex legal system and deeply protracted cases mean that, if the trial does proceed, it would take many years and multiple possible appeals for any final ruling to be made. Mr Salvini risks up to 15 years in prison and being barred from public office if found guilty.

“I am absolutely calm and proud of what I did and I will do it again as soon as I return to government,” Mr Salvini told Italian media after the vote. “I swore on the constitution, which states that defending the homeland is the duty of every citizen. I have defended Italy.”

The League leader is accused by Sicilian prosecutors of illegally keeping 131 migrants captive on board a vessel for almost a week in August 2019, when he was interior minister. Prosecutors argue that Mr Salvini’s actions were an abuse of power.

Mr Salvini has said on multiple occasions that he would relish a trial, and had previously instructed his party’s lawmakers to allow the vote to go ahead.

Under Mr Salvini’s leadership the League has been transformed from a fringe northern Italian separatist party into a pan-Italian nationalist party, driven by its leader’s focus on illegal migration.

Under Italian law Mr Salvini, who served as interior minister from June 2018 to August 2019, is immune from prosecution for actions taken during his time in government, but a legislative committee voted last month to strip this immunity, setting up the final decision by the senate.

While polls indicate that the League remains Italy’s most popular political party Mr Salvini has been frustrated in his attempts to force elections that he hopes would allow him to become the country’s prime minister.

His party failed to engineer an upset in the regional election in the left-wing stronghold of Emilia-Romagna last month, which re-elected its centre-left president in spite of frantic campaigning by Mr Salvini.

Mr Salvini also faces potential prosecution for refusing another migrant vessel from docking during his time as interior minister, with a senate panel decision on that case due by the end of this month. – Copyright The Financial Times Limited 2020.