Irishman airlifted out of Wuhan preparing to return home 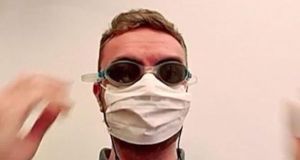 Ben Kavanagh wearing a mask and gogles in an appearance on RTÉ recently.

An Irishman quarantined in Britain for two weeks after being airlifted out of China’s coronavirus-struck Wuhan is preparing to return to his home in Co Kildare.

“It wasn’t terrible,” said Ben Kavanagh, from Kilcullen, on his 14-day isolation at Arrowe Park Hospital in Birkenhead near Liverpool.

“It actually flew by. Two weeks in quarantine – it sounds like a long time but every other night we played poker, there was food – breakfast, lunch and dinner – so it really wasn’t too bad.”

The psychology teacher who had been living and working in Wuhan was among scores of British and Irish citizens holed up in the hospital after being flown from China to the RAF base at Brize Norton in Oxfordshire.

While some chose to “self-isolate”, Mr Kavanagh said he joined the others playing cards and chatting.

He also continued to work by recording his classes on his laptop and sending them to his pupils online.

The hospital stay was less isolating than when he was under lockdown in his Wuhan apartment, he told RTÉ Radio One.

He believes he has been cleared to go home – “Should be, yeah. Hopefully” – where he intends to spend time with family and friends before eventually returning to Wuhan, where he wants to continue to work.

The virus has killed more than 1,000 people and infected over 44,000 in 25 countries so far. The biggest cluster outside China is on a cruise ship quarantined off the Japanese port of Yokohama, with about 3,700 people on board, of whom 175 have tested positive.

There have been no cases in Ireland.

Researchers at the London School of Hygiene & Tropical Medicine (LSHTM) have estimated the number of new cases in Wuhan may peak mid and late February.

To estimate the current trajectory of the outbreak in Wuhan and the potential increase in new cases there in the near future, the team used a combination of data including case reports in Wuhan, exported international cases and test results from evacuation flights out of Wuhan.

Adam Kucharski, LSHTM associate professor and a member of the modelling team, said current trends suggest a peak in mid-to-late February, “although there is of course a lot of uncertainty in exactly when this will occur and how big it might be”.

While the predictions for the outbreak peaking in Wuhan implies that the number of new cases will start to decline, it “does not imply that the disease is necessarily under control”, according to Rowland Kao, professor of veterinary epidemiology and data science at the University of Edinburgh.

Life under Level 4: What will be closed under tighter restrictions?

1 Covid-19 restrictions: Government prepares move to Level 5 for six weeks
2 Life under Level 4: What will be closed under tighter restrictions?
3 Doctors’ letter calls for new strategy to ‘co-exist’ with Covid-19
4 Government plans ‘Level 4-plus’ restrictions, with schools likely to remain open
5 Fifty-six Covid-19 cases linked to man who failed to isolate after trip abroad
Real news has value SUBSCRIBE