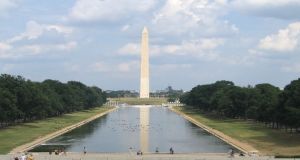 The bronze plaque, which displays the words of the 1916 proclamation, will be added to the Washington Monument. Photograph: iStock

A new plaque honouring the 1916 Rising is to be unveiled on Thursday in Washington as the famous Washington Monument re-opens to the public after a three-year renovation project.

Minister of State for the Office of Public Works and Flood Relief Kevin Boxer Moran and Senator Mark Daly will attend the unveiling, which will also be attended by the US secretary of the interior, David Bernhardt.

The bronze plaque, which displays the words of the 1916 proclamation, was presented to the US National Park Service on behalf of President Michael D Higgins and the people of Ireland.

Ireland is one of the few countries to have its own plaque on the walls of the monument. In total, 192 commemorative stones are displayed in the interior walls, mostly from other US states. Ireland will on Thursday become the 17th country with its own representation at the site. It is the first addition since 1982 when a donation from Alaska was accepted.

Speaking ahead of the ceremony, Mr Moran said it was an honour to be invited to attend the ceremony, noting that the specially-commissioned plaque recognises the fight for independence in both countries.

“The plaque acknowledges the unique and exceptional links between our two countries and recognises the contribution which many Irish have made, and continue to make, to the United States of America,” he said.

Mr Daly said the idea for the plaque arose during the centenary celebrations for the 1916 rising. In particular, it honours the memory of Thomas Francis Meagher, the Irish revolutionary who designed the Irish tricolour and fought on the Union side in the American Civil War, leading the 69th New York regiment and later becoming governor of Montana.

“It is a huge achievement for Ireland to have its own dedicated plaque, particularly given that it is such a rarity,” he said, noting that it illustrates the continued power of Irish-America.

First Lady Melania Trump and White House acting chief of staff Mick Mulvaney are due to participate in a further ceremony on Thursday which will be attended by the Irish delegation, including Ireland’s ambassador to the United States, Dan Mulhall.