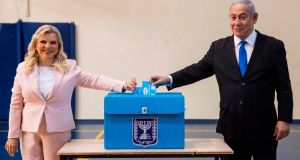 It looks unlikely that Binyamin Netanyahu has won a fifth term as Israel’s prime minister, with TV exit polls following Tuesday’s election showing his right-wing/religious bloc falling short of the 61 seats required for a Knesset majority.

But even though Mr Netanyahu lost, his main rivals, the centrist Blue and White led by former top general Benny Gantz, did not win convincingly. Two exit polls showed Blue and White emerging as the biggest party, winning between 33-34 seats, compared with 31-33 for the Mr Netanyahu’s Likud. A third poll indicated 32 seats for both parties.

With the result too close to call, all the leading politicians preferred to wait until the ballot slips are counted on Wednesday.

Mr Gantz said on Wednesday it appeared from the exit polls that Israel’s longest-serving leader was defeated but that only official results would tell.

In his own speech to right-wing Likud party faithful, Mr Netanyahu, sipping water frequently and speaking in a hoarse voice, made no claim of victory or concession of defeat, saying he was awaiting a vote tally.

Mr Netanyahu’s appearance in the dead of night at Likud election headquarters was a far cry from his triumphant declaration five months ago that he had won a close election.

His failure to form a government after the April ballot led to the new election on Tuesday. Mr Gantz, a former armed forces chief, beamed with confidence as he told a rally of his Blue and White Party that it appeared “we fulfilled our mission”, and he pledged to work towards formation of a unity government. Mr Netanyahu, he said, apparently “did not succeed in his mission” to win a fifth term. “We will await the actual results,” Mr Gantz, 60, said.

The exit polls following Israel’s second election in five months indicated a political stalemate with the likelihood of weeks of political horse-trading ahead as both Mr Netanyahu and Mr Gantz scramble to cobble together a working coalition.

The most likely scenario appears to be some kind of Likud-Blue and White unity government, possibly involving a rotation of the premiership.

Holding the balance of power is the right-wing, secular Yisrael Beiteinu led by former defence minister Avigdor Lieberman, the big winner of the election, with a projected eight to 10 seats. Mr Lieberman renewed his call on Tuesday night for a unity government comprising Likud and Blue and White together with his own party, without any religious and far-right parties.

The two left-wing parties – Labour and the Democratic Camp (formerly Meretz) – both passed the minimum threshold to enter the Knesset, while the extremist far-right, anti-Arab Jewish Strength fell short, according to all the exit polls.

Leading Likud politicians were quick to quash rumours that there may be a move within the Likud to replace Mr Netanyahu as leader.

President Reuven Rivlin will formally task one of the party leaders with forming a government next week after he completes his consultations with all the party leaders once the final results are in. He has made it clear that he will do everything to ensure that a government is formed, avoiding the nightmare prospect of a third election within a year.

The elections were very much focused on one question: should Israel’s longest-serving prime minister be given another five-year term in office. The result appears to be inconclusive.

The fact that Mr Netanyahu is facing charges of bribery, fraud and breach of trust in three corruption cases, pending a final hearing in a few weeks’ time, failed to have a dramatic impact on the campaign.

These elections were dubbed as a battle for the soul of Israel. The results indicate, yet again, that Israel’s soul is split in two.–Additional reporting Reuters

1 Tuberculosis vaccine ‘potential game-changer’ in Covid-19 fight
2 Coronavirus: Situation in Ireland ‘misrepresented’ because of limited testing
3 Coronavirus Q&A: How to shop safely during Covid-19
4 We need to cancel the Leaving Cert and give students predicted grades
5 International Space Station returns to Irish skies on Friday and Saturday
Real news has value SUBSCRIBE