‘Maybe they can forget us there’: Refugees in Libya await move to Rwanda 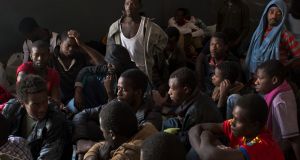 A migrant detention centre in Tripoli, Libya, in 2015. Refugees and migrants who spoke to The Irish Times by phone were apprehensive about a move to Rwanda. Photograph: Tyler Hicks/The New York Times

Hundreds of refugees in Libya are expected to be moved to Rwanda in the coming weeks, under a new deal partly funded by the European Union.

“This is an expansion of the humanitarian evacuation to save lives,” said Babar Baloch, from the United Nations Refugee Agency. “The focus is on those trapped inside Libya. We’ve seen how horrible the conditions are and we want to get them out of harm’s way.”

Many of the refugees and migrants expected to be evacuated have spent years between detention centres run by Libya’s Department for Combatting Illegal Migration, and smugglers known for brutal torture and abuse, after fleeing war or dictatorships in their home countries.

They have also been victims of the European Union’s hardening migration policy, which involves supporting the Libyan coast guard to intercept boats full of people who try to cross the Mediterranean Sea to Europe, returning those on board to indefinite detention in a Libya at war.

In Libyan capital Tripoli, refugees and migrants who spoke to The Irish Times by phone were apprehensive. They questioned whether they will be allowed to work and move freely in Rwanda, and asked whether resettlement spaces to other countries will be offered, or alternative opportunities to rebuild their lives in the long-term.

“People want to go. We want to go,” said one detainee, with slight desperation, before asking if Rwanda is a good place to be. “Please if you know about Rwanda tell me.”

“We heard about the evacuation plan to Rwanda, but we have a lot of questions,” said another detainee currently in Zintan detention centre, where 22 people died in eight months because of a lack of medical care and abysmal living conditions. “Maybe they can forget us there.”

In a statement, UNHCR said that while some evacuees may benefit from resettlement to other countries or may be allowed to stay in Rwanda in the long term, others would be helped to go back to countries where they had previously been granted asylum, or to their home countries, if safe.

The original group of evacuees is expected to include 500 volunteers.

Rwanda’s government signed a memorandum of understanding with the United Nations Refugee Agency and the African Union on September 10th to confirm the deal.

In 2017, a year-long investigation by Foreign Policy magazine found that migrants and refugees were being sent to Rwanda or Uganda from detention centres in Israel, and then moved illegally into third countries, where they had no rights or any chance to make an asylum claim.

Officials working on the latest deal say they are trying to make sure this doesn’t happen again.

“We are afraid, especially in terms of time,” said an Eritrean, who witnessed a fellow detainee burn himself to death in Triq al Sikka detention centre last year, after saying he had lost hope in being evacuated.

“How long will we stay in Rwanda? Because we stayed in Libya more than two years, and have been registered by UNHCR for almost two years. Will we take similar time in Rwanda? It is difficult for asylum seekers.”