Court has no jurisdiction on parliament suspension, says Johnson

Eleven supreme court justices are asked at the start of an historic hearing to declare that the UK prime minister’s decision to prorogue parliament for five weeks is unlawful. Video: Reuters 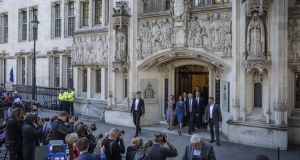 Boris Johnson has told Britain’s highest court that it cannot rule on whether his decision to suspend parliament for five weeks was unlawful. The prime minister made the assertion in a written submission as 11 judges in London’s supreme court began to consider two separate challenges to his decision to advise Queen Elizabeth to prorogue parliament until October 14th.

“The courts have no jurisdiction to enforce political conventions. Although they can recognise the operation of a political convention in deciding a legal question, such as the extent of a duty of confidentiality, they cannot give legal rulings on its operation or scope, because those matters are determined within the political world,” he said in a joint statement with Richard Keen, the advocate general for Scotland.

The court has scheduled three days of hearings as it considers the two challenges, from businesswoman and campaigner Gina Miller and from Scottish National Party MP Joanna Cherry and others.

Ms Miller’s case was rejected by an English court on the basis that the decision to suspend parliament was a matter of “high politics” in which the courts had no role. But Scotland’s highest court upheld Ms Cherry’s challenge, ruling that the prorogation was unlawful because it was designed to prevent MPs from carrying out their constitutional function.

David Pannick, representing Ms Miller, said the prime minister had suspended parliament in order to silence MPs in the weeks before Britain is due to leave the European Union.

“The prime minister’s reasons for advising on a five-week prorogation were improper in that they were infected by factors inconsistent with the concept of parliamentary sovereignty, in particular his belief that parliament does nothing of value at this time of year and his concern that parliament might take steps which would undermine the government’s negotiating position with the EU,” Lord Pannick said.

“If the judgment of the divisional court were to be upheld, the courts would have no power to review a prime minister’s advice to prorogue parliament for a period of six months, one year or longer.”

Lord Keen said the prime minister was entitled to prorogue parliament for reasons of political advantage but he said the government would abide by any ruling the court made. He declined, however, to promise that Mr Johnson would not prorogue parliament again next month if the current suspension is found to be unlawful.

In her closing speech to the Liberal Democrats’ conference in Bournemouth, party leader Jo Swinson accused Mr Johnson of pursuing a no-deal Brexit that would cause hardship to the most vulnerable.

“This Brexiteer government wants to pay for their ideology with other people’s jobs. The truth is, they won’t be affected, and they won’t be there to help when the redundancy notices are handed out. They won’t be there when the homes are repossessed or when the marriages break down under the financial stress. Which makes what Boris Johnson is doing quite so sickening – he knows all of this,” she said.

Presenting herself as a possible prime minister after the next general election, Ms Swinson said there was no limit to her ambition for the Liberal Democrats.

“Ahead of us we have the fight of our lives for the heart and soul of Britain. The next few weeks are about deciding what kind of country we are, and who we want to be. Whether we tackle our biggest challenges with our closest allies, or on our own; whether we welcome those who want to build a better life in our country, or shut the door on them; whether we ensure every single child can go on and fulfil their dreams,” she said.