Liberal Democrats face fight for ‘heart and soul of Britain’ 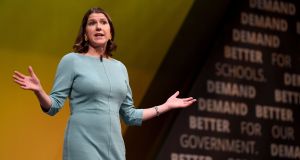 Liberal Democrats leader Jo Swinson closed the party’s annual conference with a message that members face “the fight of our lives for the heart and soul of Britain” in any upcoming election.

Ms Swinson said the party must tackle Brexit but also fight more widely against a new populist brand of politics.

Announcing that she was appearing before them “as your candidate for prime minister”, she used her first conference speech as leader to renew attacks on British prime minister Boris Johnson and Labour leader Jeremy Corbyn.

The address contained no new policy announcements, but instead reiterated pledges made on previous days, notably that a Lib Dem majority government would stop the Brexit process without resorting to a second referendum.

Another key area was a promise to base future budgets not just on narrow economic measures but a broader focus of national wellbeing, to take more action on the climate emergency, and to tackle youth crime with a public health-based approach.

At the likely imminent general election the country deserved “a better choice than an entitled Etonian or a 1970s socialist”, Ms Swinson said.

“Ahead of us we have the fight of our lives for the heart and soul of Britain. The next few weeks are about deciding what kind of country we are, and who we want to be,” she told the crowd in Bournemouth.

“Whether we tackle our biggest challenges with our closest allies or on our own; whether we welcome those who want to build a better life in our country or shut the door on them; whether we ensure every single child can go on an fulfil their dreams.”

On Brexit, Ms Swinson pledged she would revoke article 50 and thus stop Brexit “on day one” as prime minister. The party’s preferred choice remains a second referendum, but revocation would happen if they won a majority, which is unlikely.

“Because there is no Brexit that will be good for our country. Europe makes our United Kingdom stronger. But Brexit hurts our family of nations,” Ms Swinson said.

She condemned Mr Johnson’s push towards a no-deal departure, saying this would devastate the economy: “This Brexiteer government wants to pay for their ideology with other people’s jobs. The truth is, they won’t be affected, and they won’t be there to help when the redundancy notices are handed out.

“They won’t be there when the homes are repossessed or when the marriages break down under the financial stress. Which makes what Boris Johnson is doing quite so sickening – he knows all of this.”

Similarly, Ms Swinson’s speech criticised Mr Corbyn for what she called a lukewarm attitude to staying in the EU: “If he had campaigned to remain in 2016 with half of the energy he put into the 2017 election, we may have seen a different result.”

She added: “Nigel Farage might be Brexit by name, but it is very clear that Jeremy Corbyn is Brexit by nature.”

Ms Swinson ended: “Only a Liberal Democrat government can deliver the fair, inclusive and open future that we deserve. At the next general election, voters will choose the kind of country we want to be – insular, closed and selfish, or collaborative, open and generous.

“We can defeat nationalism and populism. We can change our politics, stop Brexit and win a brighter future.” – Guardian