Families of blogger couple plead for their release from Iran prison 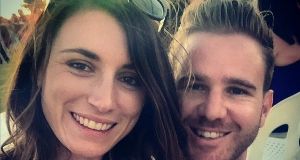 The families of a British-Australian woman and her Australian partner have pleaded for their immediate release from a notorious Iranian prison.

Jolie King and Mark Firkin, who live in Perth, Western Australia, have been held for the past 10 weeks in Tehran’s Evin prison, with Ms King recently completing a lengthy period in a tiny one-person cell.

Ms King had been “scared”, “disoriented” and “intimidated” while kept in solitary confinement, the partner of another captive in the same prison — Nazanin Zaghari-Ratcliffe — said.

The couple was arrested for flying a drone near the capital Tehran without a licence, Pouria Zeraati, editor in chief at Iranian television station Manoto TV, said on Twitter.

Mr Zeraati, citing unidentified sources, said the couple had not yet stood trial.

“The family says this was a misunderstanding and Jolie King & her fiance Mark Firkin were unaware of the Iranian law which bans drone flights without a licence,” Mr Zeraati tweeted.

Earlier reports said the couple were arrested while camping near a military area around Jajrood in Tehran province.

Australia’s Department of Foreign Affairs and Trade (DFAT) on Thursday released a statement from the couple’s families which said: “Our families hope to see Mark and Jolie safely home as soon as possible. We have no further comment to make at this stage and ask that the media respects our privacy at this difficult time.”

It has also been reported this week that a second British-Australian woman, whose name has not been made public, has also been incarcerated in the Evin prison for almost a year, having been given a 10-year sentence.

The Cambridge-educated academic, who lectures at a Melbourne university, is reportedly also being held in solitary confinement. While the charges against her have not been made public, Iran routinely hands out 10-year-sentences for spying convictions.

Evin prison, the main detention centre for Iran’s political prisoners, also houses 41-year-old Mrs Zaghari-Ratcliffe, a British-Iranian mother of one who is midway through a five year sentence on spying charges which began in 2016.

Mrs Zaghari-Ratcliffe’s husband, Richard Ratcliffe, said on Thursday Ms King was now in the same part of the jail as his wife, having come through a torrid time in solitary confinement.

“I know that the girl who is in now with Nazanin came through scared and disoriented and obviously had been quite intimidated by being interrogated for all that time in solitary,” Mr Ratcliffe told Australian Broadcasting Corporation radio.

Mr Ratcliffe said his wife had spent more than eight months in solitary confinement and had described Evin prison’s solitary cells as being “about the size of a double bed” and with no windows or natural light, meaning “it was a lightbulb on the whole time”.

It is not known whether Mr King is also in solitary confinement.

News of the three prisoners this week comes amid a downturn in relations between Britain and Iran, sparked by issues including the seizure by the Royal Marines in July of an Iranian oil tanker near Gibraltar.

Ms King, travelling on her Australian passport, and Mr Firkin, had been posting about their travels during their lengthy trip, which began in 2017, on their The Way Overland accounts on YouTube and Instagram.

After driving from Perth to Darwin and island-hopping to Asia, they had driven west through countries including India, Pakistan and China before arriving in Iran. They had ultimately planned to finish in the UK.

“Our biggest motivation behind the vlogs is to hopefully inspire anyone wanting to travel, and also try to break the stigma around travelling to countries which get a bad rap in the media,” the couple wrote in one early post.

DFAT has been negotiating with Iranian authorities for the release of all three Australian passport-holding detainees for several weeks.

While Iran has not commented publicly on any of the arrests, in April its foreign minister Mohammad Javad Zarif proposed swapping Mrs Zaghari-Ratcliffe for Negar Ghodskani, an Iranian woman in jail in the US.

British Prime Minister Boris Johnson and Foreign Secretary Dominic Raab are reportedly preparing to confront Iranian counterparts on their detention of Britons in Iran at a UN meeting in New York later this month. – PA