Corbyn vows to put ‘sensible’ Brexit deal to a referendum 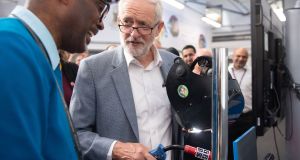 Labour leader Jeremy Corbyn will come under pressure from some party members to shift towards campaigning in favour of remaining in the EU. File image: Joe Giddens/PA Wire

British Labour party leader Jeremy Corbyn has set out the four pillars of a Brexit deal he would negotiate with the EU, as he pledged “carry out whatever the people decide” in a second EU referendum as Labour prime minister.

The Labour leader gave the clearest statement yet of his plan to offer the public a choice between a “sensible” Brexit deal negotiated by his government involving a customs union and remaining in the EU, ahead of a forthcoming battle over the party’s position at its autumn conference next week.

At the annual gathering in Brighton, Mr Corbyn will come under pressure from some party members to shift towards campaigning in favour of remaining in the EU, with senior shadow cabinet figures - John McDonnell, Emily Thornberry, Tom Watson and Nick Brown - all having said they would want to campaign to stay in the bloc regardless of any Brexit deal negotiated by Labour.

But Mr Corbyn laid down a marker of his determination to seek a better Brexit deal from the EU, which the party believes it could negotiate quickly based on conversations already undertaken with Brussels.

“A Labour government would secure a sensible deal based on the terms we have long advocated, including a new customs union with the EU; a close single market relationship; and guarantees of workers’ rights and environmental protections,” he said.

“We would then put that to a public vote against remain, and I pledge to carry out whatever the people decide, as a Labour prime minister.”

This would form the basis of what Corbyn describes as a “credible leave option” which would be offered at a referendum against the option of remaining in the EU.

“We would then put that to a public vote against remain, and I pledge to carry out whatever the people decide, as a Labour prime minister,” he said. - Guardian