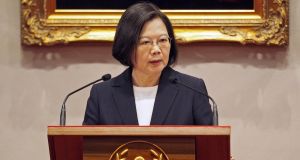 In a surprise move, billionaire Terry Gou has opted out of the upcoming Taiwan presidential race, a call that could help unite the Beijing-friendly Kuomintang (KMT) opposition party.

Mr Gou – founder of Apple supplier Foxconn and Taiwan’s richest man with a reported net worth of $7.6 billion (€6.9 billion) – was widely expected to run as an independent in January’s election, but he pulled out on Monday in the face of widespread calls for unity among the opposition.

The KMT recently placed several advertisements in major newspapers calling on Mr Gou to support its candidate, Han Kuo-yu, the mayor of the southern city of Kaohsiung, and avoid splitting the opposition vote.

President Tsai Ing-wen of the Democratic Progressive Party (DPP), who is seeking her second term, will face off against Mr Han.

Relations with China will be the burning issue in the election. Taiwan has been a de facto independent nation since the end of the civil war with Mao Zedong’s Communists in 1949, but China still considers the island its province and has pledged to take back control by any means necessary.

Under its “one China policy”, Beijing insists that Taiwan and mainland China are both part of the one nation, with the administration in Beijing its legitimate government. Beijing says it aims to ultimately reunite Taiwan and mainland China under a “one country, two systems” framework similar to that in place in Hong Kong, and has refused to renounce the use of military force should Taiwan move towards formal independence.

While the KMT advocates warmer ties and closer economic links with the mainland, Ms Tsai’s DPP has incensed China with what it sees as the party’s pro-independence leanings. The DPP’s refusal to acknowledge Taiwan as part of “one China” prompted Beijing to cut off official communications with the island and increase military posturing in the region in recent years.

Ms Tsai has shown her support for the ongoing pro-democracy protests in Hong Kong and said she would not accept a one country, two systems framework for Taiwan. She has seen her ratings rise over the past three months as the island’s voters watch the deteriorating Hong Kong situation with concern.

Her government was dealt a pre-election blow, however, on Monday when the Solomon Islands switched diplomatic allegiance from Taipei to Beijing, the sixth country to do so since she took office in 2016, following Burkina Faso, the Dominican Republic, São Tomé and Príncipe, Panama and El Salvador.

Taiwan now has formal relations with only 16 countries, many of them small nations in Central America, the Caribbean and the Pacific, including Belize, Guatemala, Kiribati and Nauru. The Vatican also maintains diplomatic relations with Taiwan.

China goes to lengths to entice countries to cut ties with Taipei, and reportedly offered the Solomon Islands $8.5 million (€7.7 million) in development funds to switch allegiance to Beijing.

The Communist Party-run newspaper the Global Times applauded the diplomatic move by the Solomon Islands and quoted an analyst who said “secessionists in Taiwan and Hong Kong should understand their attempts to split China go against the general trend and are doomed to fail”.

She said China was trying to isolate and demoralise Taiwan, and force it to accept the “one country, two systems” formula, but the island would not “engage in dollar diplomacy” or “yield to China’s bullying”.

Gearing up for the election, she said Taiwan would have to confront an increasingly strident Beijing and “the vote will be a fight for freedom and democracy”.