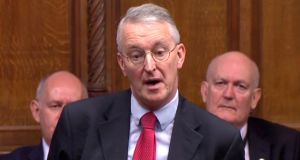 Labour MP Hilary Benn: ‘This is one example of how Brexit is proving to be very costly for our country.’ Photograph: AFP/Getty Images

The British government has stood down an army of 6,000 civil servants who had been preparing for a no-deal Brexit, at an estimated cost of £1.5 billion (€1.7 billion).

The civil servants, who had been seconded from elsewhere, will now return to their normal duties, but there is no clear role for an estimated 4,500 new recruits after the UK’s departure from the EU was postponed until as late as Halloween.

More than 16,000 British civil servants in total have been working on Brexit.

The opposition Labour Party’s Hilary Benn said it was a “costly price” to pay for prime minister Theresa May’s belligerent insistence of keeping a no-deal Brexit on the table.

“It was important to plan for all contingencies, but this is the huge cost of the prime minister repeatedly saying: ‘My deal or no deal’ when she knew that leaving without a deal was not in the national interest. This is one example of how Brexit is proving to be very costly for our country,” said Mr Benn, chair of the influential Brexit select committee.

The Cabinet Office made the decision to reverse the no-deal plans at a meeting on Thursday morning.

“In common with the rest of government, we have stood down our no-deal operational planning with immediate effect. This morning, at a meeting chaired by the cabinet secretary, we agreed that the objective is to ensure we wind down our no-deal planning in a careful, considered and orderly way,” said a letter leaked to Sky News.

Mrs May’s contingency operations have affected nearly all departments in the civil service and elsewhere in the public sector, including police, hospitals and schools.

Kent County Council said it was standing down Operation Brock – which was activated three weeks ago to guard against gridlock flowing from ferry delays in Dover – from Thursday night after local MP and May ally Damian Green said it should be “lifted as soon as possible” after the European Council Brexit delay.

“If we are definitely not leaving at the end of this week then I see no reason to continue with Operation Brock and I hope it can be lifted as soon as possible,” he told Kent Online.

Highways England staff had deployed 80 officers from elsewhere in the country to patrol roads in Kent at a cost to the British taxpayer of £119 per officer a night in hotels and food. That amounted to £66,000 a week alone for Operation Brock.

Kent said it could reverse the contraflow system on a 14-mile (22.5km) stretch of the M20 over a weekend, but it would take up to three weeks to remove the concrete barriers.

Elsewhere senior civil servants at the departments of health, transport, environment and the Home Office were in talks with politicians on what to do with the army of new recruits who may not be needed for six months. In March the National Audit Office revealed that £1.5 billion had been allocated across Whitehall for no-deal contingencies under an umbrella Operation Yellowhammer project.

Its report put the Home Office at the top spender with £400 million allocated for a new border force and other officials and IT systems, including the “settled status” app for EU citizens.

Michael Gove’s environment department was the next-biggest spender. Only two weeks ago it was still recruiting in the US for new staff. In February it emerged that it had turned to the private sector for a gold command centre in Whitehall that could stay open “potentially for two years”.

The emergency control centre was to have a team of officers producing briefing notes for ministers “at pace” and checking the “battle rhythm” for emerging urgent policy changes. These may not be needed now.

John Manzoni, the chief executive of the civil service, and the cabinet secretary Mark Sedwill have at the same time written to the public affairs and constitutional affairs committee to confirm the scale of the no-deal operations in the civil service.

In January Mr Manzoni revealed it had redeployed about 5,000 staff for no-deal contingencies. But now civil service bosses have disclosed that “across the civil service 16,118 EU exit posts have been filled”.