Reports suggest figure of as much as £1bn, as Gove says no-deal planning now priority 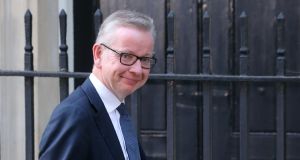 Boris Johnson’s government is planning a huge increase in funding for a no-deal Brexit after one of his ministers said its working assumption was that the UK would leave the European Union without a deal on October 31st.

Mr Johnson has set up a six-person “war cabinet” to oversee preparations for a no-deal Brexit, including a major public information campaign, and stepped-up logistical plans to mitigate disruption.

Michael Gove, who until last week was his government’s most eloquent champion of the withdrawal agreement, said yesterday that planning for a no-deal Brexit was now the top priority.

“The EU’s leaders have, so far, said they will not change their approach – it’s the unreformed withdrawal agreement, take it or leave it. We still hope they will change their minds, but we must operate on the assumption that they will not,” the cabinet office minister wrote in the Sunday Times.

Chancellor of the exchequer Sajid Javid promised “significant extra funding” for hundreds of new Border Force officers and infrastructural improvements. He did not specify the size of the extra investment but reports suggest it could be as much as £1 billion.

In Dublin, Government sources noted the stridency of the no-deal messages, and the change in rhetoric from London. A spokesman for Taoiseach Leo Varadkar noted that Mr Johnson had said he “wants to leave the EU with a deal”.

“The Taoiseach looks forward to speaking with the prime minister in the near future and hearing about how he plans to do that,” the spokesman said, adding that the EU has said the withdrawal agreement will not be reopened but that there can be changes to the political declaration on the future relationship.

“We continue to prepare intensively for no-deal,” he said.

No phone call has yet been arranged between Mr Varadkar and Mr Johnson, but Minister for Finance Paschal Donohoe has spoken to Mr Javid, and Minister for Foreign Affairs Simon Coveney has been in contact with his UK counterpart, Dominic Raab.

Chief secretary to the treasury Rishi Sunak said the government’s preference was to leave the EU with a deal but without what he called the “anti-democratic” backstop.

But Scottish Conservative leader Ruth Davidson warned ahead of a visit to Scotland by Mr Johnson today that she could not support leaving the EU without a deal. “I don’t think the government should pursue a no-deal Brexit and, if it comes to it, I won’t support it,” she said.

The EU has rejected Mr Johnson’s demand that the Northern Irish backstop should be removed from the withdrawal agreement, and French MEP Nathalie Loiseau said the agreement was the only alternative to a no-deal Brexit.

“You have changed your prime minister, but we have not changed our minds,” she told Sky News. “The agreement is a compromise; there are many concessions in it. We are protecting our citizens, peace on the island of Ireland. The agreement is not the devil, it’s a reasonable compromise to move forward.”

Meanwhile, a committee set up in the United States to protect the Belfast Agreement, which includes five former US ambassadors to Ireland, has warned the incoming Northern Ireland secretary that a future US-UK trade deal will be “all but impossible” if the peace deal is undermined.

1 Brazilian gang held in Offaly had sub-machine gun and student visas
2 All students will not return to school even if social distancing rules are relaxed – McHugh
3 Miriam Lord: Taoiseach is trapped in a Zoom session from hell
4 Coronavirus: Further nine deaths reported along with 46 new cases
5 Maria Bailey takes action against newspaper over ‘swing gate’ coverage
Real news has value SUBSCRIBE