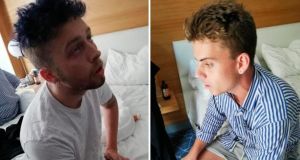 Italian police have opened an investigation after photographs emerged showing an American teenager blindfolded and handcuffed shortly after he was arrested on suspicion of killing an officer. A photo of 18-year-old Gabriel Christian Natale Hjorth, with his head bowed and hands cuffed behind his back, was shown in the Italian press on Sunday, with Corriere della Sera comparing it to images of prisoners at the US military facility Guantanamo Bay.

It was taken at a Rome police barracks where Hjorth and his friend, Finnegan Lee Elder (19), were taken for questioning after being arrested on Friday for allegedly murdering Mario Cerciello Rega (35) and injuring another officer. The photo was then reportedly shared in an internal police group chat.

The students, from San Francisco, appeared in court on Saturday, with Elder accused of repeatedly stabbing Rega while Hjorth allegedly “pummelled” the second officer. A police statement said both Americans, when confronted with “hard evidence”, had “confessed to their blame”.

Giovanni Nistri, the commander general of the carabinieri military police, denounced the photo and said an inquiry was under way.

“This is an unacceptable episode and should be treated as such,” he told Corriere della Sera. Police commander Francesco Gargaro told the newspaper that the officer who blindfolded Hjorth said he did so in order to avoid the teenager seeing office documents and information on the computer. Ansa news agency reported that the officer has been transferred from operational duty.

Hjorth received no sympathy from Italy’s hardline deputy prime minister and interior minister, Matteo Salvini, who attacked those who denounced the photo. “To those who complain about the blindfolding of an arrestee, I remind them that the only victim to cry for is a man, a son and a 35-year-old husband,” he wrote on social media.

“A policeman who served the homeland, who died on duty at the hands of someone who, if found guilty, deserves jail for life. With hard labour.”

Rega, who had recently returned to work from his honeymoon, and his colleague were in plain clothes when confronted by the two Americans in the wake of a drug deal gone wrong, a court heard on Saturday. Both students are also being investigated for attempted extortion in connection with the alleged drug deal. Investigators say the pair had snatched a bag from a drug dealer in Rome after the man apparently sold them a different substance to the cocaine they wanted. It is claimed the students then demanded a cash ransom and cocaine to return the knapsack.

The victim of the bag-snatching contacted the carabinieri after reporting the theft, and the plainclothes officers were sent to the site, the police statement said. It added that the Americans, “even though the officers identified themselves as being carabinieri, didn’t hesitate to engage in a struggle, culminating in the mortal wounding” of the policeman. Rega died in hospital soon afterwards. Police said surveillance cameras and witnesses allowed them to quickly identify the Americans and find them in a nearby hotel.

Police also said the two Americans were “ready to leave” Italy when found. A long knife was found during a search of their hotel room. Corriere della Sera reported on Sunday that the pair had been in the Italian capital on holiday. – Guardian News and Media 2019