Diarmaid Ferriter: Traditional roles of Anglo-Irish relations are being reversed 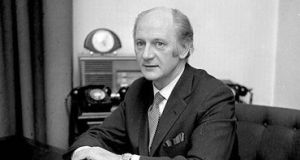 Former taoiseach Jack Lynch: he struggled to find a coherent, agreed cabinet response as the North became inflamed in 1969

Fifty years ago this summer, as the new Fianna Fáil government led by Jack Lynch took office, there was no indication that the situation in Northern Ireland was formally on its radar. Of the 11 cabinet meetings that took place between July 3rd and August 7th, no references to the North were recorded in the minutes.

This was partly due to a reluctance to confront a subject that divided ministers, but also an indication that the priority of the new minister for external affairs, Patrick Hillery, was to focus on Europe and get Ireland ready for EEC membership, especially as president Charles de Gaulle in France had resigned and there was a belief this might enable enlargement of the EEC.

I remember how stunned we English intruders were to discover what a perversion of society existed beneath the mantle of the crown.”

As recounted by historian Ronan Fanning, when Hillery took up office he was given a tour of the headquarters of his department in Iveagh House, and he innocently asked the secretary of the department, Hugh McCann, “where’s the Northern Ireland desk?” McCann’s reply was “we don’t have one. The thinking has always been that it’s not external.”

As the North became inflamed later that summer, Lynch as taoiseach struggled to find a coherent, agreed response; cabinet meetings became fervid and he was under pressure to be seen to react trenchantly to the deteriorating situation and demand that the UN intervene.

Rumours of possible Irish Army excursions over the Border and demands from the North that the government directly intervene filled the air. Television continued to lay bare the starkness and volatility, while young reporters, including Max Hastings, who the following year published his book Ulster 1969, were aghast: “I remember how stunned we English intruders were to discover what a perversion of society existed beneath the mantle of the crown.”

The British government seemed a lot more prepared than the Irish one in August 1969; prime minister Harold Wilson was determined, in his own words, to “play it cool”.

He committed British troops to the North but whatever about the private view that the Stormont government had run out of road, there was to be no deviation from the insistence that nothing would be done by the government to prompt the resignation of the Northern Ireland prime minister James Chichester-Clark.

The other insistence was that this was an internal UK matter and therefore “external” to the Republic, regardless of what was believed in Iveagh House.

British ministers, it seemed, had subjected the Northern Ireland problem to a lot more analysis than their counterparts in the Republic judging by the evidence in British archives, including the preparation of a draft bill in early 1969 for the introduction of direct rule.

Yet there was also a willingness to humiliate the Irish government, as indicated by the refusal of Wilson to meet Lynch throughout 1969. Irish diplomat Paul Keatinge asserted forlornly “the most we can hope for is British recognition of the fact that we have an interest in and a right to be heard on what is happening in the North”.

Part of the lack of preparation on the Irish side was due to genuine confusion and bewilderment born of a reliance on the anti-partition slogans of old, a historic reluctance to take any meaningful look over the Border and a resultant lack of awareness of the mentalities of the inhabitants of the North.

But moves were made to confront this; a dedicated Anglo-Irish section was set up in the department of external affairs in 1970, and discrete diplomacy was used to bring the focus back to the imperative of direct Anglo-Irish talks, which was also a position the British government came round to even if it continued to dispute the Republic’s claims.

What is remarkable today is how the roles have been reversed compared to the summer of 1969; there is more coherence on the Irish side and a reliance on rallying cries and emotion rather than intelligent strategy on the British side.

The context today, of course, is very different as the Irish dilemma has become an EU one; in that sense the Irish question has been internationalised in a way that was not achieved in 1969, but there are still relevant lessons today from the critical phase of Anglo-Irish relations that began 50 years ago.

Solutions cannot be formulated without direct and meaningful channels of communication, which require willingness on two sides, some degree of flexibility and soft diplomacy.

Despite the contemporary stridency and the complications of dealing with a character of the ilk of prime minister Johnson, Anglo-Irish relations need to be repaired and managed carefully to try to dilute the current version of what Hugh McCann described to the British ambassador in 1969 as the “momentum of disorder”.