Johnson urges EU to get rid of ‘anti-democratic’ backstop

British prime minister Boris Johnson has called the Irish backstop "anti-democratic", adding that it needs to be removed from any Brexit agreement with the EU in order for talks to progress. 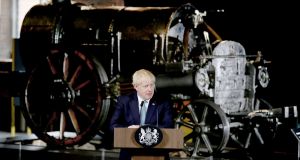 British prime minister Boris Johnson gives a speech in front of a Stephenson’s Rocket at the Science and Industry Museum in Manchester. Photograph: Lorne Campbell/Pool via Reuters

British prime minister Boris Johnson cautioned the European Union on Saturday that the “anti-democratic” Irish backstop must be ditched if they were to strike a Brexit divorce deal.

Mr Johnson, since taking office on Wednesday, has repeatedly said that if the EU continues to refuse to renegotiate the withdrawal agreement agreed by his predecessor Theresa May, then he will take the UK out on October 31st without a deal.

“If we get rid of the backstop, whole and entire, then we are making a lot of progress,” Mr Johnson said, when asked if it was only the Irish Border backstop that he wanted changed.

The backstop is an insurance policy to avoid a hard border in Ireland, which would effectively keep the UK aligned with the EU customs union in the absence of a new trade agreement.

Speaking in Manchester, Mr Johnson said: “The approach of the UK government is not going to be disengaged or aloof or waiting for them to come to us: we are going to try to solve this problem and we are going to do it in a spirit of friendship and co-operation.”

“But we can’t do it as long as that anti-democratic backstop, that backstop that seeks to divide our country, divide the UK, remains in place,” he said. “We need to get it out and then we can make progress, I think.”

Mr Johnson insisted the country had to “get ready” for the prospect of a no-deal Brexit.

“I don’t think that’s where we will end up. But as I have told our European friends, we are going to prepare very actively for that eventuality in high confidence that this is an amazing country and we will get through it if we need to.”

Mr Johnson dedicated most of his speech to improving public services, transport and the internet and driving up economic growth.

He pledged a £3.6 billion boost for left behind towns as he sought to shift the political spotlight from Brexit to the domestic agenda.

Mr Johnson also promised funding for a new rail link between Manchester and Leeds, as well as a boost for broadband connectivity and extra resources for crime-fighting.

The emphasis on the domestic agenda continued to fuel speculation the prime minister is keeping his options open for a snap general election, despite his strong denials.

Mr Johnson said: “We are going now to have a £3.6 billion Towns’ Fund supporting an initial 100 towns, so that they will get the improved transport and the improved broadband connectivity that they need.”

He gave his backing to the trans-Pennine transport link between Manchester and Leeds which is intended to help “turbo charge” regional growth.

In a clear pitch to traditional Labour voters, Mr Johnson insisted that politicians had failed people in the north.

“A few miles away from here, the story is very different.

“The story has been for young people growing up there of hopelessness, or the hope that one day they will get out and never come back.

“They haven’t failed. It’s we, us, the politicians, our politics has failed them.”

Downing Street said that detailed plans regarding the proposed Manchester to Leeds rail route would be published in the autumn, following a review into HS2.

The trans-Pennine route is expected to cut journey times and provide additional capacity for people across the region.

Shadow transport minister Rachael Maskell said: “It’s quite embarrassing the prime minister had to ask people to applaud his announcement of a faster line between Leeds and Manchester.

“It’s quite clear the northern audience know that it’s not even a half measure and not worth clapping.

“This is sadly once again another Tory prime minister coming to the north with nothing new.

“There is no timeline, no linking of northern towns, just more vague promise of a skeleton line, and a rehash of the insulting level of investment for the region that Theresa May tried and failed to bribe Labour MPs with a few months ago.” – Reuters/PA