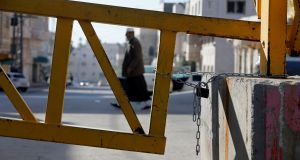 Israeli prime minister Binyamin Netanyahu pledged to “fight this with all our might” after the United Nations published a list of 112 companies that do business in West Bank settlements.

Israel immediately severed all contact with the UN office of the High Commissioner for Human Rights and Mr Netanyahu vowed that Israel would boycott the boycotters.

“Instead of the organisation dealing with human rights, it only tries to disparage Israel. We strongly reject this contemptible effort,” he said.

Mr Netanyahu made clear he considered the US government’s position on settlements under President Donald Trump more important than the views of UN bodies.

“We will ensure the [US administration’s] recognition of our sovereignty over those settlements – that will cancel out the entire impact of the United Nations because the United States is more important than the UN,” he said.

President Reuven Rivlin responded by reading out a long list of Israeli companies mentioned on the list and encouraging Israelis to support them.

Palestinian officials welcomed the fact that the list has finally been published after years of delay.

“The publication of this list of companies and parties working in the settlements is a victory for international law,” said Palestinian foreign minister Riyad al-Malki. He urged member states of the UN Human Rights Council to study the list and recommend and instruct the companies cited on it to terminate their operations in the settlements.

Palestinian prime minister Mohammed Shtayyeh called on the companies listed in the report to immediately close their branches in settlements, and said the Palestinian Authority would demand compensation from the listed firms.

Of the entities listed, 94 are domiciled in Israel and 18 in six other states – the United States, France, the Netherlands, Luxembourg, Thailand and the UK. None of the companies is Irish, but many do business in Ireland.

The list also includes firms which do business in Jewish neighbourhoods in east Jerusalem and on the Golan Heights – also areas occupied by Israel since the 1967 Six-Day War.

The list will be updated annually, and companies can be delisted if they can prove that they no longer provide material support to West Bank settlements.

The list marks a major setback for the settler movement. Last month, Jewish residents of the West Bank celebrated the publication of the US Middle East peace plan, which gave Washington’s green light for Israel to annex the Jordan Valley and extend sovereignty to the settlements, although the move has been put on hold until a new Israeli government is formed after next month’s election.

Human Rights Watch said the list “should put all companies on notice: to do business with illegal settlements is to aid in the commission of war crimes”.