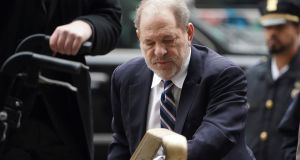 Harvey Weinstein: Faces life in prison if convicted of predatory sexual assault, the most serious charge against him. Photograph: Carlo Allegri/Reuters

A lawyer for Harvey Weinstein told a New York jury on Thursday that they were the “last line of defence” against an “overzealous prosecution,” as Mr Weinstein’s weeks-long rape trial comes to a close.

The prosecution “wove a sinister tale of a man who searched out his victims by putting them through a series of tests”, but that story was not supported by evidence, Mr Weinstein’s lawyer, Donna Rotunno, told a Manhattan jury during closing arguments.

She stressed that Mr Weinstein was presumed innocent, and urged jurors to put aside emotion and use their “common sense” when considering the evidence. “Historically you are the last line of defence in this country from the overzealous media, from the overzealous prosecution,” Ms Rotunno said.

Mr Weinstein (67), has pleaded not guilty to raping Jessica Mann, a one-time aspiring actress, in 2013 and to sexually assaulting former production assistant Mimi Haleyi in 2006.

Ms Rotunno began her closing argument by thanking the jurors for their time and attention during the trial that began on January 6th. “Harvey thanks you,” she said. “After all, his fight now lies in your hands.”

The jury is expected to hear the prosecution’s closing argument on Friday.

Mr Weinstein faces life in prison if convicted of predatory sexual assault, the most serious charge against him.

Ms Mann testified that Mr Weinstein raped her in a Manhattan hotel room early in what she called an “extremely degrading” relationship with him. It continued for years and included consensual sex, Ms Mann said.

Ms Rotunno presented her with numerous affectionate emails she sent the producer after the alleged rape, including one in which she wrote, “I love you, always do.”

Ms Haleyi said she “went numb” during the encounter and did not want to have sex with Mr Weinstein. Under cross-examination, she said she had not been forced. She acknowledged sending several friendly emails to Mr Weinstein in the following years.

On Thursday, Ms Rotunno said the emails Ms Haleyi sent Mr Weinstein after he allegedly assaulted her showed there had been no assault.

“The government [prosecution] will tell you emails don’t matter,” Ms Rotunno said. “In what other circumstance would real time evidence not matter?”

Ms Rotunno said the “real time communication” between Ms Haleyi and Mr Weinstein would lead “any reasonable person” to conclude they had a good relationship.

She said prosecutors were trying to take a consensual sexual encounter and “spin it into something else”, thereby “stripping women of any ability to make their own decisions”.

Mr Weinstein’s lawyers have argued that the two women’s interactions with him after the alleged attacks show that their encounters were consensual.

To bolster the prosecution case, four additional women were called by prosecutors, including actor Annabella Sciorra, who said Mr Weinstein raped her in the early 1990s. – Reuters