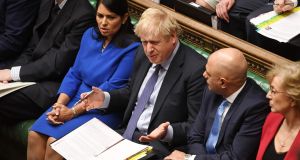 British prime minister Boris Johnson in the House of Commons: he said it was right that foreign national offenders should be deported ‘in accordance with the law’. Photograph: Jessica Taylor/AFP via Getty Images

Jeremy Corbyn has used Boris Johnson’s personal history to accuse the prime minister of hypocrisy in deporting to Jamaica black men convicted of drug offences. During a heated exchange in prime minister’s questions, the Labour leader referred to Mr Johnson’s admission that he used cocaine when he was young.

“If there was a case of a young white boy with blond hair who later dabbled in class A drugs, and conspired with a friend to beat up a journalist, would he deport that boy? Or is it one rule for black boys from the Caribbean and another for white boys from the United States?” Mr Corbyn said.

Mr Johnson, who was born in New York and retained US citizenship until he became foreign secretary in 2016, was recorded in 1990 promising to help his friend Darius Guppy find the address of a journalist Mr Guppy wanted to beat up. He said on Wednesday that Mr Corbyn demeaned himself by asking the question.

About 50 people, including some convicted of rape, manslaughter and drug offences, were due to be deported to Jamaica this week. But the court of appeal blocked the deportation of 25 of them because a mobile phone signal outage last month prevented them from receiving adequate legal advice.

Mr Corbyn said that some of those being deported had been drawn into drug crime by so-called county lines gangs who use children to carry drugs from one part of the country to another.

“Does the prime minister think that someone who came to this country at the age of five and was the victim of county lines grooming and compelled to carry drugs, released five years ago and never reoffended, deserves to be deported?” he asked.

Mr Johnson said it was right that foreign national offenders should be deported “in accordance with the law”.

Earlier, attorney general Geoffrey Cox suggested that prospective supreme court justices could be subjected to interviews before a parliamentary committee. He said a commission on the constitution could look at a similar system in Canada that is credited with bolstering public confidence in the judiciary.

“We are not going to be talking about a party-politically appointed set of judges. However, I think there is a case for looking at how supreme court judges are appointed,” he told the Institute for Government.

“I would oppose US-style hearings. But I have to say that one of the things that is worth looking at in my view is how it’s done in Canada. In Canada now, for appointments to the supreme court, there is a committee of the Canadian parliament that will carry out interviews. In our country it could be a joint committee of the House of Lords and the House of Commons under clear guidance.

“There would be rules as to the questions that could be asked. But what it would lend, potentially, is transparency to a position which, people have seen, has enormous power.”