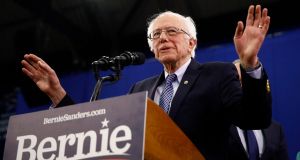 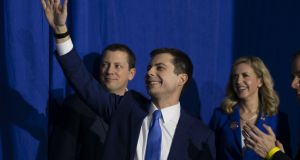 Pete Buttigieg waves to the crowd during a primary night rally in Nashua, New Hampshire on Tuesday. Photograph: Kate Flock/Bloomberg

New Hampshire on Tuesday became the second state in the nation to choose its preferred candidate for the Democratic nomination ahead of November’s presidential election, following last week’s Iowa caucuses.

Mr Sanders’s victory puts the Vermont socialist ahead of his rivals as he seeks to become the party’s nominee for president, having lost the 2016 primary contest to Hillary Clinton. He won the New Hampshire contest with approximately 26 per cent of the vote, boosted by a strong performance in the state’s main cities such as Manchester and Nashua as well as college towns.

But Mr Buttigieg performed better than expected at 24 per cent, significantly closing the gap with Mr Sanders in recent days as he benefitted from a surge in support following his unexpected victory in Iowa.

Mr Buttigieg, who has positioned himself as a moderate who can appeal to centrist Republicans, noted in his speech that he had reached out to “newly former Republicans ready to vote for something new – ready to vote for a politics defined by how many we call in rather than who we push out”.

Ms Klobuchar’s performance – and the poor showing by Ms Warren and Mr Biden – was one of the main taking points of the night.

Ms Klobuchar, who secured 20 per cent of the vote, had enjoyed record crowds, increased donations and higher polling in the 36 hours leading up to Tuesday’s primary, prompted in part by a strong performance in a candidates’ debate and a Democratic political dinner at the weekend. Her success may have come to the detriment of Mr Biden, a fellow moderate Democrat.

Earlier in the day, the former vice-president cancelled an appearance at his election party on Tuesday night in Nashua, New Hampshire, instead leaving the state for South Carolina to campaign ahead of the February 29th primary there. Mr Biden is banking on a strong performance in the first southern state to hold a primary, particularly among African-American voters as he tries to salvage his faltering campaign.

In a sign of the political difficulties now facing Ms Warren and Mr Biden, neither candidate secured any of New Hampshire’s 24 state delegates – a key metric in the primary contest — as both finished in single digits.

Still in the race

Ms Warren – who as a senator from the neighbouring state of Massachusetts had expected to poll well in New Hampshire – addressed her supporters early in the evening. She insisted that she was still in the race, noting that the Democrats were only at the start of the primary process.

“We’re two states in, with 55 states and territories to go,” she said. “We still have 98 per cent of the delegates for our nomination up for grabs, and Americans in every part of our country are going to make their voices heard.”

Focus will now turn to Nevada, which holds its caucus on February 22nd, followed by the South Carolina primary a week later.

On March 3rd, more than a dozen states will vote on “Super Tuesday”, with former New York mayor Michael Bloomberg expected to put in a strong showing. The billionaire businessman has not contested the early voting states, instead hoping to benefit from a possible split vote among Democrats when he enters the contest in early March.

Democrats will ultimately choose their candidate to take on Donald Trump in November’s presidential election at the Democratic National Convention in Milwaukee in July.