By the numbers: Can Boris Johnson get his deal through Westminster?

President of the European Commission, Jean-Claude Juncker, has said that work will move to a future relations negotiations as soon as the Brexit deal is approved by Westminister and the European Council. 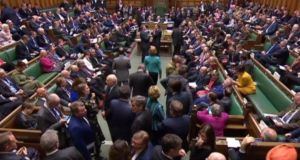 Boris Johnson needs 320 MPs to back his deal to win a majority of one. File photograph: Getty

There are 650 MPs in the House of Commons. Minus those who do not vote – the speaker, the three deputy speakers and the seven abstentionist Sinn Féin MPs – it leaves an electorate of 639 MPs.

Boris Johnson needs 320 MPs to back his deal to win a majority of one.

With Jacob Rees-Mogg, the leader of the European Research Group (ERG) of Tory MPs suggesting he will vote for the deal, it is likely all ERG Tory MPs will follow suit. That’s 287 Tory MPs supporting the Johnson deal, but the prime minister will still be short 33 MPs.

Where will those 33 MPs come from?

There are 19 Labour MPs who sent a letter to EU Commission president Jean-Claude Juncker last week expressing a desire to vote for a deal if agreement can be reached between the EU and the UK.

They will come under heavy pressure in the coming days not to back the Johnson deal from within the Labour Party with leader Jeremy Corbyn saying it is worse than what was proposed several times by Theresa May.

Assuming (and it is an assumption) the Labour Party MPs defy the whip and vote for Johnson’s deal, that brings his numbers up to 306, still 14 short of a majority.

There are 20 Tories, almost all of them Remainers, who lost the Tory whip over the party’s stance on Brexit. They have no love for Johnson, but their votes might be decisive in avoiding a no-deal Brexit, the prospect of which caused them to leave the party in the first place.

If Johnson was to get the support of the 19 Labour MPs and the 20 former Tory MPs, he would have 326 votes, enough to pass the deal.

This, however, is the most optimistic scenario. There is no guarantee he would get the votes of all the members of the ERG, the 19 Labour MPs and the 20 former Tory MPs. Realistically he would need the support of all these MPs to get the deal across the line.

Not even seasoned Westminster watches know at this stage if Johnson will have the numbers. It is that fraught.

Elsewhere, there is another group of 13 mostly independent Labour MPs who quit the party. They too are mostly Remainers who want a second referendum. It is unclear which way they will vote or if they will vote as a bloc.

This leaves us with the 10 DUP MPs. According to the parliamentary arithmetic, their votes will not be decisive one way or the other, but they will be a help to Johnson in getting others on board.

Johnson can ignore their opposition if he gets the numbers elsewhere – therefore his decision to forge ahead with the agreement between the EU and the UK despite the reservations of the DUP.

Johnson is betting Brexit fatigue and the low standing of the House of Commons will prompt MPs to “get Brexit done” and move on to other issues.

The alternative view of his strategy is that he wants the deal to fail, so triggeringh an election he believes the Tories will win.