Labour conference in Brighton off to shambolic start 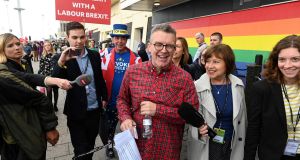 Even by the frenzied standard of contemporary British politics, Labour’s annual conference in Brighton has got off to a startlingly shambolic start. The bungled attempt to abolish Tom Watson’s post of deputy leader contrived to weaken the position of everyone involved.

Momentum founder Jon Lansman, who led the plot, looked foolish when Jeremy Corbyn pulled the plug on it. Corbyn looked gormless when he told Andrew Marr he had known nothing about it – “I’m not all-seeing and all-knowing: I’d love to be.”

And although Watson survived an alternative to Lansman’s motion will effectively block his path to becoming acting leader if Corbyn steps down.

Hostilities between Watson and Corbyn’s circle are nothing new, but the resignation of Andrew Fisher highlights the divisions among the leader’s supporters. A key adviser since Corbyn won the Labour leadership in 2015, Fisher was the architect of the party’s 2017 general election platform of Keynesian social democracy which proved popular with voters.

Fisher’s unhappiness centred on the culture within Corbyn’s office and what he described as its lack of professionalism. Many more of the Labour leader’s allies are frustrated with his approach to Brexit, where he is resisting pressure to commit the party to keeping Britain in the EU.

Delegates were preparing to work through the night in an attempt to agree on a composite motion that would replace dozens of Brexit motions from constituencies. But the trade unions, which control half the votes at conference, will ram through Corbyn’s preferred position unless a compromise is found.

Corbyn wants to postpone a decision on whether to back remaining in the EU until after a general election, a Labour government to negotiate a new withdrawal agreement within three months and to put it to a referendum within six months.

A special conference would decide what position the party should take in the referendum, which would be a choice between remaining in the EU or backing an exit deal, but a no-deal Brexit would not be an option.

Labour’s divisions over Brexit and infighting at the top are likely to overshadow domestic policy announcements at the conference. But the party’s commitment to dramatically expand universal benefits on the model of the National Health Service could form the heart of its campaign against Boris Johnson at the next election.

Such ambitious policies to transform society, along with eye-catching initiatives like the abolition of private schools, could help Labour to move the focus of the next election away from Brexit to more promising terrain.