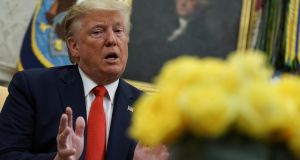 US president Donald Trump has defended his decision to part ways with national security adviser John Bolton, telling reporters that the hawkish defence official was “not in line” with White House policy.

During an extended media appearance in the Oval Office at which he announced plans to ban flavoured e-cigarettes, Mr Trump said that he wished Mr Bolton all the best, though he added: “I’m sure he’ll do whatever he can do to spin it his way.”

Mr Trump announced he had dismissed his top national security official on Tuesday, but Mr Bolton disputed the president’s account, arguing that he had resigned.

The president criticised Mr Bolton’s stance on a range of foreign policy issues, including Venezuela and North Korea, arguing that his then national security adviser had jeopardised negotiations with North Korean leader Kim Jong-un by mentioning the Libyan model during a meeting. “That was not a good statement to make, and it set us back,” Mr Trump said.

He added that Mr Bolton “wasn’t getting along with people in the administration who I consider very important”.

Mr Bolton was the president’s third national security adviser. Among those in contention to replace him are North Korea representative Stephen Biegun; Brian Hook, the representative to Iran, and ambassador to Germany Richard Grenell.

Mr Trump gave little away as to his next foreign policy moves following Mr Bolton’s departure. He declined to say if he would meet Iranian president Hassan Rouhani at the UN General Assembly later this month, only noting that Iran had “great potential”.

Earlier in the day, the president took a tough line on potential terrorists at a ceremony to mark the 18th anniversary of the September 11th attacks. “If for any reason they come back to our country, we will go wherever they are, and use power, the likes of which the United States has never used before. And I’m not even talking about nuclear power. They will never have seen anything like what will happen to them,” he said at the Pentagon.

The US president also faced questions about his role in the decision by the National Oceanic and Atmospheric Administration (NOAA) to criticise publicly its own weather forecasters for contradicting Mr Trump’s incorrect assertion last week that Hurricane Dorian would hit Alabama.

The New York Times reported on Wednesday that Mr Mulvaney told Mr Ross to put pressure on the NOAA to disavow a tweet from its Alabama branch that contradicted Mr Trump’s claim.

The president defended his erroneous mention of Alabama in subsequent days, including displaying a map that appeared to have been doctored to include the southern state in the storm’s projected path.

The House of Representatives science committee has launched an investigation into the matter. Committee chairwoman Eddie Bernice Johnson said she was “deeply disturbed by the politicisation of NOAA’s weather forecast activities for the purpose of supporting an incorrect statement by the president”.