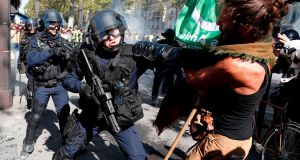 French police fired tear gas and drove back protesters from streets around the Champs-Elysées and the Jardin du Luxembourg in central Paris on Saturday as the gilets jaunes (yellow vest) movement announced a post-holiday comeback.

Authorities deployed 7,500 members of the security forces in the capital in a show of force. They also banned demonstrations in eight parts of the city, including key government buildings and tourist sites such as the Eiffel Tower and the Arc de Triomphe.

President Emmanuel Macron’s government is seeking to deter the uncontrolled violence that led to the vandalising of the Arc de Triomphe and the ransacking of shops along the Champs-Elysées, the famous Paris shopping avenue, in December and March.

By mid-afternoon, police said they had held 137 people for questioning and searched hundreds more to seize weapons and equipment used by potential rioters.

Scores of young “black bloc” revolutionaries infiltrated a demonstration by thousands of gilets jaunes and anti-capitalists marching for the global climate and for social justice on the Boulevard Saint-Michel near the Jardin du Luxembourg. They smashed bus shelters and shop windows and set fire to motorcycles in the road.

At one point, anti-capitalists and environmental campaigners shouted angrily at each other in an argument over the tactics used by the marchers, with the greens criticising the street violence.

Earlier, pairs of police on motorcycles – the brigades de répression de l’action violente (motorised anti-violence brigades or Brav) – rushed from street to street to drive away dozens of the black bloc wreckers from the Champs-Elysées.

After nearly a year of anti-government demonstrations, the gilets jaunes have evolved from a motorists’ protest against green fuel taxes – motorists have to carry yellow fluorescent vests in their vehicles for safety – into a broader anti-establishment movement.

The recent marches in Paris of the largely leaderless gilets jaunes have shrunk in size and been increasingly dominated by anarchists and leftists who say they want to topple Mr Macron.

Several different marches were held in Paris on Saturday, including one led by the Force Ouvrière trade union against the Macron government’s planned reforms to the pensions system.

The violence and the police action to prevent demonstrators reaching banned areas led to the closure of museums such as the Grand Palais and of key bridges across the Seine on Saturday, and severely disrupted an annual heritage weekend when government and private buildings are opened for public viewing.

Mr Macron responded to the gilets jaunes protests by abandoning the green fuel tax rises, releasing billions of euros in government spending to improve rewards for low-paid workers and launching a two-month “great national debate” to discuss everything from the cost of living to immigration.

1 Aldi, Lidl bow to pressure to ban non-essential ‘middle aisle’ sales
2 Cork shootings: Gardaí believe older son was shot multiple times
3 Bodies of mother and two children removed from south Dublin house
4 Young homeless mother may have been dead in tent for a number of days
5 The real Contagion virus is out there and it’s causing virologists to worry
Real news has value SUBSCRIBE