Stakes high for Netanyahu as Israel goes to polls 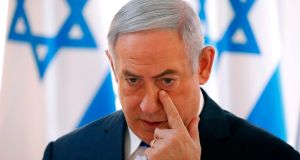 Earlier this year, Binyamin Netanyahu became Israel’s longest-serving prime minister. On Tuesday, he seeks to win a fifth term in office in what promises to be a cliffhanger election.

The weekend polls showed an increase in support for Mr Netanyahu’s ruling Likud party and his potential coalition partners, putting the right-wing, religious bloc just a couple of seats short of a 61-majority in the 120-seat Knesset parliament.

The Likud and the centrist Blue and White, led by former top general Benny Gantz, are battling it out to emerge as the largest single party with the polls showing a dead heat or a single-seat advantage for the Likud.

Blue and White together with the two small left-wing parties (Labour and the Democratic Camp) and the predominantly Arab Joint List are predicted to win only 52-56 seats.

The linchpin will be the right-wing, secular Yisrael Beiteinu led by former defence minister Avigdor Lieberman, who says he will only recommend for prime minister a candidate who commits to forming a coalition without the religious and smaller far-right parties. Mr Gantz has already made such a promise; Mr Netanyahu is still hoping he can form a government without Mr Lieberman.

President Reuven Rivlin, after consulting all the party leaders next week, will task one of them with forming a coalition.

In such a close race, a number of factors could swing the election. Three parties are close to the 3.25 per cent minimum threshold required for Knesset representation and any of them falling beneath the threshold could determine who Israel’s next prime minister will be.

The extremist, anti-Arab Jewish Strength resisted pressure from Mr Netanyahu to withdraw and is now projected to enter the Knesset with four seats, although it remains very close to the threshold.

Labour and the Democratic Camp (an alliance of the Meretz party with former prime minister Ehud Barak) are each polling between four and six seats, putting both in danger of failing to enter the Knesset.

Another critical factor will be voter turnout. Tuesday’s election is the second in five months and after a lacklustre campaign there is a fear of a low turnout, which is generally believed to favour Mr Netanyahu.

Particularly important will be the turnout among Israeli Arabs who comprise more than 20 per cent of the population. In the April election voter turnout in the Arab sector was significantly lower than the nationwide average (49 per cent compared with 68 per cent).

For Mr Netanyahu the election represents maybe his last chance for a “get out of jail free” card. Next month the attorney general will conduct a pre-indictment hearing in three separate corruption cases involving gifts from businessmen and quid pro quo agreements for favourable media coverage.

Mr Netanyahu vows he will fight to clear his name, claiming he is the victim of a left-wing witch-hunt.

If he forms his fifth government, he is likely to fast-track legislation granting him immunity to prevent prosecution, in what many Israelis perceive will be a dangerous precedent, undermining the rule of law.