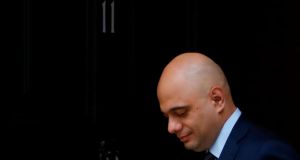 Outgoing chancellor Sajid Javid has warned Boris Johnson not to undermine the credibility of the treasury as the prime minister’s team took effective control of the UK’s finance ministry. Mr Javid resigned on Thursday after Mr Johnson demanded he sack all his advisers and use a joint team with No 10 instead.

“While I am grateful for your continued trust and offer to continue in this role, I regret that I could not accept the conditions attached to the reappointment,” Mr Javid wrote in his resignation letter.

“It is crucial for the effectiveness of government that you have people around you who can give you clear advice, as I have always sought to do. I would urge you ensure the Treasury as an institution retains as much credibility as possible.”

Mr Javid’s resignation came just four weeks before he was due to deliver his first budget, making him the first chancellor for half a century to leave office without having delivered one.

His successor, Rishi Sunak, who had been his deputy, agreed to the conditions that have been viewed in Whitehall as part of a power grab by the prime minister’s chief adviser, Dominic Cummings. Mr Sunak (39) is a committed Brexiteer who cemented his reputation as a rising star in the Conservative Party when he stood in for the prime minister in TV debates during last December’s general election campaign.

Former justice secretary David Gauke suggested that Mr Sunak, who has been a fiscal hawk, could be in a stronger position than the circumstances of his appointment suggest. “Having lost one chancellor, to lose another chancellor would be incredibly difficult, so Rishi Sunak is actually in quite a strong position now,” he told BBC Radio 5 Live.

“Although there will be a lot of talk about him being Boris Johnson’s placeman, if he wants to assert himself you could argue that he is pretty well unsackable.”

Mr Johnson had not intended to sack Mr Javid, and he met him in Downing Street on Thursday morning to tell him he was keeping his job. It was only after the prime minister told him he had to fire his advisers that Mr Javid said he could not continue as chancellor.

Meanwhile, Labour called for an investigation into who paid £15,000 (€18,000) towards the prime minister’s holiday on the Caribbean island of Mustique over the new year. The prime minister listed the holiday as a “benefit in kind” donated by “Mr David Ross” in the register of MPs’ interests.

But Mr Ross, a Conservative party donor, said he did not cover the cost of the holiday and did not own the villa where Mr Johnson and his partner, Carrie Symonds, stayed. Labour’s shadow cabinet secretary, Jon Trickett, said MPs were obliged to identify who paid for any gift or donation.

“Boris Johnson must come clean about who has paid for his luxury trip. If he fails to do so, the parliamentary commissioner for standards should step in and make him fess up. The public deserves to know who is paying for their prime minister’s jaunts,” he said.