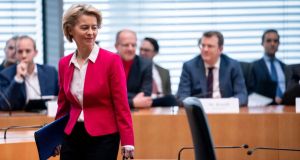 European Commission president Ursula von der Leyen has denied claims that, in her previous role as German defence minister, she squandered hundreds of millions of euro on consultants.

Ms von der Leyen was testifying at a Bundestag inquiry into how she steered efforts to modernise the German military and address chronic problems in the acquisition and maintenance of equipment.

Opposition parties have accused her of ignoring procurement procedures and of potentially destroying evidence on ministerial mobile phones wiped when she departed last year for Brussels.

In five hours of closed testimony on Thursday, Ms von der Leyen admitted that mistakes were made in procurement procedures, and that considerable sums were spent on outside consultants. But problems were later identified and addressed, she said, and consultant bills were the price for an expedited, overdue reform of Germany’s armed forces.

“It is all the more regrettable . . . that mistakes were made,” she said. “But a lot of good was achieved.”

Digitising the military, in particular boosting cybersecurity, was begun on her watch and, “was not possible without outside help”, she said. She defended her practice of bringing in consultants, even hiring a McKinsey partner as a senior adviser, saying that “support and consultant services have always existed in the defence ministry”.

Her term as defence minister saw a steep rise in consultant costs, peaking at €155 million in the first half of last year alone. This was almost as much as all other 13 ministries combined.

Quizzed about her official phones, the former minister said she handed them back on leaving Berlin and was not aware that all data on them would be deleted. She doubted they contained any information vital to the investigation.

Ms von der Leyen left without speaking to the waiting media, leaving opposition MPs in her wake to fume at the “homeopathic doses” of her self-criticism.

“The former minister spoke in abstract terms about mistakes,” said Tobias Lindner of the opposition Green Party. “but there was no readiness to name concrete mistakes or take responsibility.”

The commission president was the last of more than 30 witnesses heard by the inquiry, which has also inspected more than 4,000 files. In a previous sitting it heard testimony from Katrin Suder, a former consultant hired by Ms von der Leyen in 2014 as armaments state secretary.

Her tasks included streamlining procurement processes to stem chronic cost overruns on major equipment acquisitions. Investigators accuse Ms Suder of not revealing that she was friends with the head of a management consultation that received multimillion-euro IT contracts. Reports claim her friend’s bills to the ministry jumped in a short time from €459,000 to €20 million.

Ms Suder, who left the ministry in 2018, said she had made her friendship known. Ms von der Leyen said on Thursday she was not aware of this. Asked if she thought Ms Suder influenced the awarding of contracts, she said: “I assume not”, adding that contract decisions were “way below my level”.