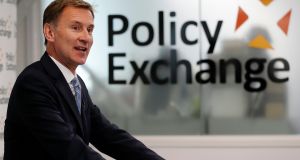 Conservative leadership contender Jeremy Hunt has said he would abandon talks with the European Union at the end of September if he sees no prospect of a new Brexit deal that could win a majority at Westminster. Mr Hunt said he would put a new plan before the House of Commons in early September and then negotiate with the EU for three weeks.

“As prime minister I will make a judgment on September 30th as to whether there is a realistic chance of a new deal being agreed that can pass the House of Commons,” he said.

“If my judgment – and the judgment of my cabinet – is that there is a deal to be done I will seek to conclude the negotiations and pass a new meaningful vote and any necessary legislation in the House of Commons before the end of October. If my judgment is that there is no deal to be done, I will immediately cease all discussions with the European Union and focus the whole country’s attention on no-deal preparations.”

Mr Hunt, who is trailing Boris Johnson in polls of Conservative Party members, said he would form a negotiating team including members of the hardline Brexiteer European Research Group, centrist Conservatives, the DUP and Scottish and Welsh Conservatives. It would be supported by Crawford Falconer, a New Zealander trade expert at the department for international trade.

“They will be tasked with producing an alternative exit deal, based on the alternative arrangements proposals, that can command a majority in the House of Commons and addresses, seriously and forensically, legitimate EU and Irish concerns about the Irish Border and the integrity of the single market. This plan will be published by the end of August,” he said.

Mr Hunt promised to set up a taskforce to prepare for a no-deal Brexit and a £6 billion (about €6.7 billion) bailout for farmers and fishermen affected by the imposition of tariffs in such a scenario. A National Logistics Committee would produce a plan to keep goods flowing after a no-deal Brexit and assess what emergency powers might be needed to ensure that ports and airports work smoothly.

“In any negotiation you need leverage, and part of ours is showing that we have a plan to ensure we succeed as a country through a no-deal exit from the EU, and we are willing to use that plan if we can’t get an acceptable deal,” he said.

“So I urge any colleagues thinking of blocking a no-deal Brexit to reflect that you may in fact be making it harder to get a negotiated exit, by giving the EU misplaced confidence that we will give ground, and ultimately increasing the chance that we leave without a deal.”