Vatican diplomat accuses Spain of ‘bringing Franco back to life’ 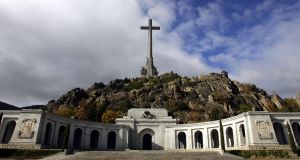 The basilica of the Valle de los Caidos (The Valley of the Fallen) outside Madrid, where former Spanish dictator Francisco Franco is buried. Photograph: Philippe Desmazes/AFP/Getty Images

The Spanish government has become embroiled in a war of words with the Vatican over the handling of the remains of dictator Francisco Franco.

Renzo Fratini, who represents the Vatican as the nuncio to Spain, has warned that the Socialist government is unwittingly bringing Franco “back to life” with its plans to exhume him.

The acting administration of Pedro Sánchez has been trying to move the body of Franco from his huge mausoleum outside Madrid, the Valley of the Fallen, to a more low-key site. However, since the announcement of the initiative in June of last year it has been beset by delays.

The most recent of these has been caused by a legal challenge by the grandchildren of Franco. They oppose the moving of the remains but say that if it should take place they want their grandfather, who ruled Spain from 1939 until his death in 1975, to be reburied in a crypt beneath Almudena cathedral in central Madrid. The government fears this would turn the crypt into a far-right pilgrimage site.

While the supreme court has been considering the Franco family’s appeal, Monsignor Fratini queried the wisdom of the project in an interview with Europa Press news agency.

“Honestly, there are so many problems in the world and in Spain – why bring him back to life?” the nuncio said. “I say that they have brought Franco back to life. It would have been better to leave him in peace – most people [and] politicians think that way because 40 years have gone by since he died. He did what he did.”

The nuncio pointed out that the controversy surrounding Franco’s remains has led to an increase in visits to his mausoleum. The Valley of the Fallen received 81,000 visitors in the first quarter of this year, according to official figures, 75 per cent more than the same period in 2018, when the exhumation initiative had not yet begun.

Franco’s nationalists defeated the leftist republicans in the three-year civil war that preceded his dictatorship. In what appeared to be a criticism of the Spanish government, Monsignor Fratini said: “Behind this [exhumation plan] is an ideology of some who want to divide Spain again.”

The acting Spanish government, which is hoping to win a parliamentary investiture vote later this month, responded on Monday to the nuncio’s comments by promising to lodge a formal complaint with the Vatican.

“These declarations don’t surprise me, I have already had some difficult conversations with the nuncio,” said deputy prime minister Carmen Calvo, who said he had “meddled in the domestic affairs of a state”.

Although Spain’s Catholic Church has declared itself neutral on the exhumation issue, the Benedictine monastery which manages the Valley of the Fallen has opposed the government’s plan. It has emerged that the prior of the monastery, Santiago Cantera, was a far-right activist before joining the church.