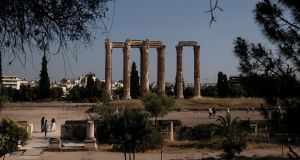 People visit the archaeological site of the ancient Temple of Zeus, a symbol of ‘the glory that was Greece’, in Athens. Photograph: Alkis Konstantinidis/Reuters

I was told recently that the Greek community in Ireland disapproves of me because I am not a true “philhellene” – meaning, someone who loves Greece – because I sometimes write critically of Greek affairs, especially the bureaucracy, the political and commercial corruption and the lack of opportunity for enterprise. Apparently, if you do not love Greece and the Greeks unreservedly, you cannot be a philhellene.

This reminds me of some Irish in America who carry with them a mental picture of Ireland as an idyllic state with not a hint of clerical child abuse, cronyism or political unrest other than that caused by the British and the unionists.

I plead guilty. And I also aver that for Greeks in Ireland to be willingly blind and deaf to the faultlines in their home country is equally anti-Hellenic.

No one living in Greece can ignore the deep problems of the state. These are not merely the current economic crisis and the looming casus belli with Turkey over ownership of some oil-rich islands, but ideological arguments which have divided Greece since its inception: modern versus traditional, religious versus secular, West versus East.

There are two principal lessons to be learnt from the recent conviction of a Greek Orthodox bishop for the crime of inciting hatred. The first is the simple fact that a prelate of the church could commit such an offence.

When in 2015 parliament passed a law approving same-sex civil partnerships, Bishop Amvrosios of Kalavryta denounced gay people, advocating that one should “spit on them”. The Greek Orthodox Church had condemned the legislation, but Amvrosios was more outspoken than his colleagues. “Do not go near them! Do not trust them! They are the damned members of society!”

The second lesson is the initial acquittal of the bishop in 2018, which caused such outrage among human rights groups that prosecutors appealed the acquittal, and he eventually received a seven-month suspended sentence.

At the time the law was passed, prime minister Alexis Tsipras, who had consistently argued for the separation of church and state, declared that: “This ends a period of backwardness and shame for the state.” Acknowledging the church’s opposition, he said: “Greek society is not as fearful and mean as some people wish to present it.”

However, Tsipras’s subsequent attempts to uncouple church and state have not proceeded. There remains a government department called the ministry of education and religious affairs, which employs most of the country’s priests and facilitates the strong Orthodox presence within the school system.

The Orthodox Church holds a constitutional position in Greece similar to that enjoyed by the Catholic Church in Ireland until the 1972 referendum. It is held in traditional respect even by non-attenders, and its opposition to homosexuality, sex education in schools and cremation is pervasive.

The church has openly associated with, and given blessings to, members of the neo-Nazi Golden Dawn, whose leader has referred to the support he receives from certain (unnamed) bishops.

The church pays no taxes and, as the second-largest landowner in the state, ran into a massive embarrassment in 2008, when the Vatopedi monastery on Mount Athos was involved in a real-estate land swap with the government, resulting in a reputedly massive and fraudulent profit for the monastery.

The subsequent investigation, which was, to say the least, lacking in transparency, culminated in 2011 in the arrest of the abbot of Vatopedi but, amid judicial secrecy that has been attributed to the continuing influence of the church at the highest levels, it was almost impossible to establish who had been indicted in the inquiry, on what charges or with what result.

“Vatopedi” remains a codeword for the ambivalent relationship of church and state, and for the level of tolerable corruption: a meeting point of the Byzantine, the Kafkaesque, and Murphy’s law.

There is an enduring hangover that “the glory that was Greece” in classical times (the birthplace of democracy and philosophy) is still “the glory that is Greece” – an untenable proposition because it is today a largely undemocratic state that has lost its wisdom and the power of lateral thinking and impedes the real glory of Greece: the intelligence of its young people,

The principal reason for the success of the Greek diaspora in the US, Australia, the UK and the Republic is that, in reluctant flight from an inhospitable homeland, Greeks found themselves in societies where enterprise and self-development were not only rewarded but were essential for survival. This continues to be the unfortunate situation.

If a Greek living in Ireland had a pothole outside his front gate like the one currently impeding my comings and goings he would be entitled to complain. He certainly wouldn’t be impugning the entire Irish State or the Irish people among whom he lives by doing so. But potholes are like “Vatopedi” – they may point to greater holes in the fabric of Greek society. And I cannot ignore them.