Johnson tells Tory hustings he is not trying to avoid scrutiny 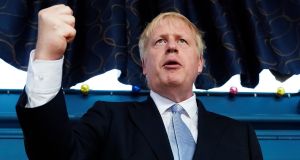 Boris Johnson has insisted he is not trying to avoid scrutiny as he campaigns to become British prime minister, saying he is able to unite the Conservative party despite warnings from MPs that they could bring down his government to avoid a no-deal Brexit.

At a hustings event in Exeter for Tory members on Friday, Mr Johnson and Jeremy Hunt both appeared but were again questioned separately and did not debate each other directly.

One audience member asked Mr Johnson if his refusal to go head to head with Mr Hunt beyond taking part in two television debates – one already gone and another due next month, after many activists will have voted – meant he was running scared.

Mr Johnson rejected this, saying a gladiatorial contest between himself and Mr Hunt could do harm. “One of the important things as Conservatives is not to spend too much time tearing great lumps out of each other in advance of the end of the contest. My policies and so on have received a huge amount of scrutiny,” he said.

“I’m doing at least two head-to-head debates, which I think is probably more then enough to glut the appetite of the electorate. I’ve done loads of debate in my time, loads and loads.”

Mr Hunt said that while he was keen to avoid an overly brutal battle, he stood by his decision to term Mr Johnson a “coward” for avoiding head-to-head events.

“I have been asked about 1,000 times this week to make comments about Boris’s personal life, and I have rejected every single one. But we do need to have a debate on very important issues,” he said.

Mr Hunt stressed he would not challenge Mr Johnson on personal issues in his life. “When we are in a constitutional crisis, frankly the biggest constitutional crisis of my lifetime, it demeans that competition if we start having huge discussions about people’s private lives. I think we should stick to the issue facing the country,” he said.

As he did at a hustings the previous evening in Bournemouth, Mr Johnson refused to rule out proroguing the House of Commons to stop MPs potentially blocking a no-deal Brexit, while saying he was “certainly not attracted” to the idea.

“There are all sorts of things that remain on the table, but it’s a very big and capacious table,” Mr Johnson said.

He was asked how he could unify the party when a series of Conservative MPs had promised to consider backing a formal no-confidence vote in his government if it pursued a no-deal Brexit, among them the junior culture and digital minister, Margot James.

Mr Johnson said that in the first series of leadership votes, among Tory MPs, he had attracted, “much to the surprise of the pundits, the support of more than half of the parliamentary party”.

He added: “Our team now has the backing of powerful, strong remain campaigners, as well as leavers. Dozens on either side. And they’re coming together because they want to get this thing done and they want to help deliver that modern, Conservative, progressive agenda.”

In another part of the hustings, Mr Johnson dismissed reports he had referred to the French as “turds”. “I have no recollection of this comment. It’s not very well sourced, this story, but anyway,” he said.

In a controlled, cautious performance, Mr Johnson gave away very little new. Asked by the host, Iain Dale, to reveal something about himself people did not know, Mr Johnson said he weighed 15½ stone (98.5kg). – Guardian