How do you decide fiscal policy when faced with Brexit uncertainty?

Chris Johns: framing a budget while pondering the existential question of Brexit might best be left to philosophers 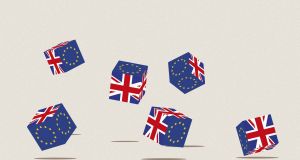 The Irish economy will look very different depending on the nature of Brexit. Things are either going to stay roughly the same or they are not. That’s the sum total of our knowledge

One of the first Greek philosophers, Heraclitus, coined the aphorism “you can never step in the same river twice”. Different people take this to mean different things.

It could be a statement about the way everything changes; nothing stays the same despite appearances to the contrary. But it could also mean that despite the obvious changes, the flowing of the river, the basic nature of things is essentially invariant.

Given these opposing interpretations one might be tempted to wonder about the point of philosophy. That, I suspect, would be a cheap shot better directed – or perhaps similarly directed – at economics.

Such musings are prompted when thinking about the current state of the economy; indeed of economics itself. Framing a budget while pondering the existential question of Brexit might better be left to philosophers rather than economists.

The Department of Finance correctly describes the problem: the Irish economy will look very different depending on the nature of Brexit. Things are either going to stay roughly the same or they are not. That’s the sum total of our knowledge.

Another parallel from philosophy (from physics actually, but the two are often indistinguishable): Schrodinger pondered the existence of his cat. When kept in a box the question arises about whether or not the poor creature is alive or dead. Quantum uncertainty means that it exists in both states until somebody looks at it.

So it is with Brexit: we won’t know its state until we actually see it. And then we will know whether the Irish budget, as announced in October, will be dead or alive.

If things were unchanging we wouldn’t be looking at government borrowing costs at zero or, as in many countries including Ireland, actually negative. Paschal Donohoe can borrow money today, stick it under the mattress, and eventually pay back his creditors less than they have lent him.

Negative interest rates, in purely financial terms, would normally allow the Minister for Finance to borrow large sums to fund infrastructure projects that yield a small positive return. It would make abundant sense to do so. That seems almost subversive so it’s worth repeating: borrowing for investment can be a good idea.

Economists would, if Brexit didn’t exist, be urging Donohoe to “go large”: there are so many much-needed public sector capital investment schemes it would be seen as almost a crime not to take advantage of the kindness, if not the weirdness, of bond markets.

Instead economists are queuing up to urge the Government to run a budget surplus. In purely financial terms this is peculiar. That surplus usually means the government buys back its debt. That debt is more expensive, for the purchaser, than it has ever been. That’s what negative interest rates mean. It’s a rum use of taxpayers’ money: spend it on an asset that has never been pricier.

Of course, things aren’t normal. Brexit has seen to that.

There is also always a hidden agenda for the deficit scolds: wherever we start from there is always a reason to cut back on borrowing. This is a fixed, unchanging, timeless perspective: cut back on government spending and borrow less.

It was this line of thinking, in part at least, that gave us Brexit: the unnecessary austerity of the Cameron-Osborne era contributed to the disenchantment of many Leave voters.

To be fair to those with a debt fetish, the point about borrowing for nothing and investing at a positive rate of return does tend to ignore reality. Here we don’t need to ponder reality from a philosophical perspective, we just have to look at it.

In the real world we often do not know the rate of return on public sector investment. When we do that return is sometimes less than its cost, which itself is often under-estimated ex ante. And it is too easy to allow borrowing for investment (good ) to end up in current spending (bad).

Boris Johnson gives us his dead cat story. When asked a difficult question his response is, metaphorically, “...to toss a dead cat on the table. That way, all attention is then focussed on the cat, not the question.” Just watch him, he does it all the time. Labelling him a clown is a disservice to circus performers.

Is Brexit alive or dead? We will know soon enough. Sartre wrote about nausea, something we can all relate to. We are sick to death of Brexit and its existential consequences.

But not the majority of Tory members who, when asked, are unequivocally willing to sacrifice the union and their own party’s existence in the interests of a no-deal exit. Existential is the only word for it.

Conservative party activists, a mixture of golf club committee members and UKIP entryists, have been described as a death cult. Montaigne suggested that to defeat death we have to embrace it. His thesis is about to be put to the test.

The nature of reality is tricky enough for philosophers; the Conservative party has lost its battle with it.

How to frame fiscal policy when faced with Brexit uncertainty?

Donohoe is standing in a river that could flow either way. Johnson would advise the sacrifice of yet another cat. In the land of grown-up politics that isn’t an option. In the circumstances the Finance Minister would be best advised to do nothing, just stand there.