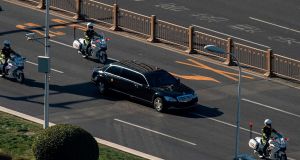 A vehicle in the motorcade of North Korean leader Kim Jong-un in Beijing on Tuesday. Photograph: Nicolas Asfouri/AFP/Getty Images

Mr Kim arrived in China for his fourth trip to China in a year on Monday afternoon in a private train accompanied by his wife, Ri Sol-ju, and other senior North Korean officials, according to North Korea’s state-run KCNA news agency.

Chang’an Avenue, which runs through central Beijing, was blocked off as Mr Kim’s cavalcade made its way for the meetings.

The four-day visit is significant as China seeks to boost its position as a global diplomatic player, and also underline China’s importance as North Korea’s closest ally at a time when relations between Beijing and Washington DC are strained.

Investment from China has long supported the troubled North Korean economy, but North Korea’s decision to go ahead with its nuclear and missile programmes, despite pressure from its neighbour, has made relations tense.

During his New Year’s speech, Mr Kim only touched on nuclear weapons, focusing instead on economic reform. North Korea has agreed to reopen the jointly operated Kaesong industrial complex and the Mount Kumgang tourism zone without conditions.

“The reason North Korea can take the daring step toward denuclearisation and engagement with the US is mainly because of its trust in China,” Mr Wang told the Global Times.

Mr Kim is expected to make the first visit to South Korea by a North Korean leader early this year.

According to South Korean newspaper reports from Vietnam, Hanoi is seen as a possible location for the next Donald Trump-Kim summit, and US officials have met their Vietnamese counterparts in the capital.

A flight there would also be in airspace over countries friendly to North Korea, a prime security concern for Mr Kim. Like the rest of his family, he tends to travel on a luxury, military train donated by the Soviet Union many years ago.

MR Trump has said a second summit could take place as early as January. Other suggested venues include Hawaii, Singapore, Mongolia and Switzerland.