Brexit: EU letter not legal treaty but should be taken seriously

Analysis: Extension of article 50 negotiation process would be one off and not to be repeated 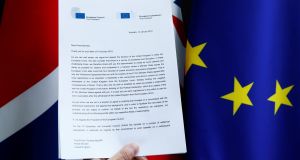 When, in December, the British government received from the European Council a number of clarificatory assurances on the temporary nature of the proposed Brexit backstop, those were greeted by a chorus of “not legally binding”, “not worth the paper they are written on”.

Critics of prime minister Theresa May insisted the “legally justiciable” treaty language of the withdrawal agreement meant any such separate promises, or the EU commitments to expedite discussions on a replacement future framework agreement, were little more than pious aspirations.

Monday’s new letter of assurance from the presidents of the European Council and European Commission, Donald Tusk and Jean Claude Juncker, addresses that issue directly in an attempt to make the deal more palatable. Although the declarations from the European Council are not legal treaties, they are nevertheless “solemnly” binding on the union and its institutions, the UK is reminded. They should be taken seriously.

“European Council conclusions have a legal value in the Union commensurate to the authority of the European Council under the treaties to define directions and priorities for the European Union at the highest level and, in the specific context of withdrawal, to establish, in the form of guidelines, its framework,” the letter says. “They may commit the European Union in the most solemn manner.” That is also true of the political declaration on the future relationship also agreed in December: “the Withdrawal Agreement and the Political Declaration ... while being of a different nature, are part of the same negotiated package.”

The letter makes clear that the Union is not in a position to resile from or in any way undermine the obligations set out in the Withdrawal Agreement, or specifically its Northern Ireland protocol in which the backstop provisions are spelled out.

“As you know,” the letter says,”we are not in a position to agree to anything that changes or is inconsistent with the Withdrawal Agreement, but against this background, and in order to facilitate the next steps of the process, we are happy to confirm, on behalf of the two EU Institutions we represent, our understanding...”

That understanding involves a joint view of the backstop as a malign necessity which can only be temporary “unless and until” it is replaced by an agreement on a future relationship which provides the sort of guarantees necessary to safeguard a frictionless border.

The commission commits to entering negotiations and proceeding with then as expeditiously as possible with a view to ensuring that when the extendable transition period of two years comes to an end it will not be necessary to trigger the backstop.

The letter also makes clear that “Any arrangements which supersede the protocol are not required to replicate its provisions in any respect, provided that the underlying objectives continue to be met.” The specific language of the protocol is not seen as binding.

In the event of a No vote on Tuesday it appears here almost inevitable that the UK will seek an extension of the Article 50 negotiation process, delaying its departure from the EU.

That can only be done by unanimity of the 27 remainer states and there is little doubt that they will accede although, observers here say, to get that consensus leaders are likely to set clear conditions – the extension would be one-off, not to be repeated, and of short duration, perhaps two or three months.

Crucially they will have to be convinced the extension will produce a definitive result one way or another. That may mean a requirement of a guarantee, not easy constitutionally for the UK to give, that a second referendum result will be implemented whichever way it goes.

A vague promise to arrange more parliamentary votes is not thought likely to pass muster with leaders.

An extension poses a particular set of problems for the European Parliament which has elections looming in May. If the UK is still a member of the Union, then it will have a right to elect MEPs and the revised national numbers – Ireland is due to get two more post-Brexit MEPs – will not come into play. That is likely to cause considerable anger across the parliament.

One option being considered may be that temporary MEPs could be nominated rather than elected for the UK. But the problem of lost seats would remain.