Serbs protest ahead of Putin’s visit to Belgrade 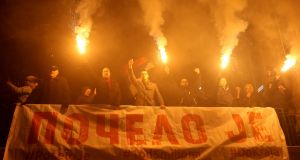 Protesters light flares in front of a banner reading in Serbian Cyrillic “It has began” in Belgrade, Serbia on Saturday. Photograph: Andrej Cukic/EPA

Thousands of Serbians have taken to the streets again in protest against their president, Aleksandar Vucic, as his allies planned a major counter-rally to coincide with a visit from Russian president Vladimir Putin.

For the sixth week in a row, demonstrators marched through Belgrade on Saturday to express their anger at what they call the increasingly autocratic rule of Mr Vucic, whom they accuse of undermining democracy, the rule of law and media freedom to cement his power.

Chanting “Vucic is a thief” and waving banners reading “Rise up Serbia”, the protesters demanded an end to corruption and violence against government critics; more airtime for opposition voices on public media; and the dismissal of interior minister Nebojsa Stefanovic.

They also urged people to rally again on Wednesday, a year after moderate Kosovo Serb politician Oliver Ivanovic was shot dead outside his office in Mitrovica in northern Kosovo.

Mr Ivanovic was an advocate for inter-ethnic co-operation in Kosovo and a fierce critic of Mr Vucic and his allies in the former Serbian province; his murder remains unsolved.

“He was one of us, and we should pay tribute to him. Come to a peaceful rally [on Wednesday] without whistles but with candles. We want to mark that day, so such things do not happen again,” said actor and protest leader Branislav Trifunovic.

Kosovo Serb politician Rada Trajkovic also criticised Mr Vucic for negotiating over Kosovo’s future with the country’s leaders while refusing to make any concessions to the protest movement.

“He is in favour of compromise with [them] but not with you; he is for compromise with everyone except with fair and honest people,” she told demonstrators in Belgrade, who chanted accusations of “Betrayal, betrayal” against Mr Vucic.

As opposition activists prepare for Wednesday’s rally in memory of Mr Ivanovic, the president’s allies are planning a major pro-government march for Thursday, when Mr Putin is due to arrive for his latest visit to Belgrade.

After serving as information minister under warmongering Serbian leader Slobodan Milosevic in the late 1990s, Mr Vucic now brands himself as a conservative who wants his country to join the EU while maintaining close ties with Moscow.

Russia dominates Serbia’s energy sector and is helping upgrade its military, while continuing to act as Belgrade’s chief international ally in refusing to recognise Kosovo’s 2008 declaration of independence.

Serbia is important to Russia as a strategic foothold in the Balkans, where it is losing influence as former Yugoslav states join the EU and Nato.

The next to join the military alliance could be Macedonia, where parliament last Friday approved a deal with Greece to change its name to North Macedonia, in return for Athens lifting its veto on the country’s Euro-Atlantic integration.

If Greece’s parliament now backs the accord, North Macedonia could join Nato later this year.