Following UK election night? This is what you need to know

Key constituencies, how the system works and where you can follow the drama 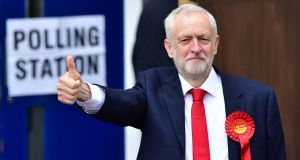 With divergent opinion polls pointing to everything from a Conservative landslide to a hung parliament, nobody can confidently predict the outcome of the UK general election on Thursday. Prime minister Theresa May called the election three years ahead of schedule in the hope of multiplying her working majority of 17.

The outcome will not be clear until late in the night, but early results will offer some clues about whether the parties are heading for triumph or disappointment.

The polls close, and an exit poll based on 20,000 interviews in 100 seats will give the first projection of the outcome. Exit polls have been broadly accurate in most recent UK elections, although they can be up to 20 seats out. So if the exit poll is predicting a landslide you can to go to bed fairly confident of the outcome, but if it suggests a closer result it could be a long night.

Houghton and Sunderland South will be the first constituency to declare, probably before 11pm. It’s a safe Labour seat the party could lose only in an electoral earthquake, but here, and in two other Sunderland seats that follow, it will be important to see where Ukip’s 2015 vote goes. If the Ukip vote collapses and moves wholesale to the Conservatives it could be a good night for the Tories. But if the Ukip vote holds up, or is shared with Labour, a big Conservative victory looks difficult.

Results will trickle in, including the first from Northern Ireland, with the seats of North Antrim and Foyle. The one to watch is Nuneaton, which Labour hoped to capture from the Conservatives in 2015. It will take a major upset for Labour to overturn the 5,000-vote majority, but the margin could offer an indication of the national trend.

The pace picks up – and the fate of the first true marginal of the night, Ealing Central and Acton, will become known. Rupa Huq of Labour is defending a majority of 274 votes, and if the Conservatives fail to dislodge her they may struggle to pick up other Labour seats in London and southeast England. Early Scottish results around now will offer an indication of whether the SNP is set to lose many seats to other parties. And the first tight Northern Ireland contest will be decided in South Antrim, where Danny Kinahan of the UUP faces a challenge from the DUP.

Results will come in at a rate of two a minute. If the Conservatives are doing well they will pick up Clacton (formerly Ukip’s only seat) and capture Southport from the Liberal Democrats and Ilford North from the rising Labour star Wes Streeting.

The Liberal Democrats will discover if Vince Cable has recaptured his seat in Twickenham. If Labour wins Croydon Central from the Conservatives, Jeremy Corbyn could have more good news to look forward to later. The Conservatives hope to defeat Labour’s Clive Lewis in Norwich and to topple the veteran left-winger Dennis Skinner in Bolsover.

We should know the shape of the next government around now, but individual seats will be interesting. The fate of two of Labour’s most prominent women MPs, Gloria De Piero in Ashfield and Jess Phillips in Birmingham Yardley, will become clear. So too will the outcome in Fermanagh and South Tyrone, where Tom Elliott of the UUP faces a strong challenge from Sinn Féin.

The focus will be on individuals such as the Liberal Democrats’ Norman Lamb, in North Norfolk, and Labour’s Cat Smith, in Lancaster and Fleetwood, who are under threat from the Conservatives. And as the outcome becomes clear party leaders will start to face the consequences – which could cause one or more of them to resign.

There are 650 one-seat constituencies – each with an average of 72,000 eligible voters. Therefore a parliamentary majority requires 326 seats.

In reality, because the speaker doesn’t vote, and Sinn Féin MPs have no particular interest in voting, the working majority is always a few seats less than that.

The candidate who has the most ballot papers with an “X” beside their name wins. The first-past-the-post system also has the advantage (or disadvantage, depending on your viewpoint) of, usually, resulting in one-party majority governments. However, the system also results in many predictable constituencies, which leaves voters of other parties feeling forgotten and disenfranchised.

It also means many candidates will be elected without the support of a majority of the voters in their respective constituency.

Along with UK subjects, Republic of Ireland citizens resident in Britain or Northern Ireland are also eligible to vote. Turnout in the 2015 general election was a relatively healthy 66.4 per cent – though last year’s EU referendum was a much higher 72.2 per cent. The Labour Party will be particularly keen to get the youth vote out, with opinion polls showing a heavy bias for Labour among the young, and for the Conservatives among the old. However, in 2015, the turnout among those aged 18-24 was just 43 per cent.

In 2015, the three main parties won the following:

Again, 326 is the official number for a controlling majority in the House of Commons.

The Irish Times and irishtimes.com

You can follow the count overnight, and all the morning drama, at irishtimes.com. Hugh Linehan will be on duty on the liveblog, with up-to-the-minute news and updates, from 9pm until 5am, when he will pass the election baton to Rachel Flaherty. Tomorrow morning, as results emerge, we’ll have the latest news and reaction, with Denis Staunton and Simon Carswell writing from London on what it means for the UK; Gerry Moriarty on the outcome in Northern Ireland; Peter Geoghegan in Scotland on the how the SNP performs; Political Editor Pat Leahy on the implications of the result for Ireland; and Cliff Taylor with economic analysis.