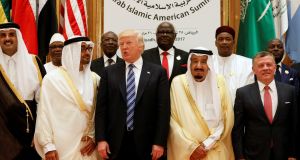 A joint investigation by the FBI and the UK’s National Crime Agency has concluded that Russian hackers were responsible for sending out fake messages from the Qatari government, sparking the Gulf’s biggest diplomatic crisis in decades.

It is believed that the Russian government was not involved in the hacks; instead, freelance hackers were paid to undertake the work on behalf of some other state or individual. Some observers have claimed privately that Saudi Arabia or the United Arab Emirates may have commissioned the hackers.

On Monday, Saudi Arabia, UAE, Egypt and Bahrain launched an unprecedented campaign to isolate Qatar diplomatically and economically over links to the Muslim Brotherhood, Hamas and Iran. All four countries have withdrawn their ambassadors. They have also launched an economic blockade, including denial of air space, leading to panic-buying in the capital, Doha.

Qatar claims the hacking operation was designed to discredit the emir of Qatar by attributing to him remarks in support of Iran and critical of Donald Trump. It has pointed out that fake news items, which were a product of the hack, were quickly picked up by Saudi and UAE news agencies.

The Saudi foreign minister, Adel al-Jubeir, said he had no knowledge of the results of the FBI inquiry. The Russian government has denied any involvement in the hacking.

In a further tightening of the diplomatic screws on Wednesday, Qataris were banned from landing at any airports in UAE, even to transfer flights. UAE has also banned its own citizens from using social media to express views sympathetic to Qatar.

Amid mounting regional and international concern, Mr Jubeir, speaking in Germany, said the Gulf states did not need any outside help to settle its dispute. “We have not asked for mediation, we believe this issue can be dealt with among the states of the Gulf Cooperation Council. ”

The dispute has significant geopolitical implications. Qatar is home to the largest US military base in the Gulf and is the world’s largest exporter of liquid gas. A worst-case scenario for the west would be the break-up of the anti-Islamic State coalition.

UAE’s foreign minister, Anwar Gargash, said the anti-Qatar alliance was not seeking to displace the Qatar royal family, but foster a change in approach. “We have now reached a cul-de-sac in terms of trying to convince Qatar to change course,” he said, accusing Qatar of being “the main champion of extremism and terrorism in the region”.

UAE wants Qatar to sever its ties with Egypt’s Muslim Brotherhood, the Palestinian Islamist group Hamas, and Iran. It also seeks to close news outlets seen as critical of the Gulf monarchies, such as the Qatari-funded al-Jazeera.

Hamas and Muslim Brotherhood leaders live in Doha, and Qatar has shown a willingness to retain diplomatic contacts with Iran, partly due to joint economic interests, including a large shared underwater gas field.

In its first statement since the crisis erupted, the Muslim Brotherhood rejected the Saudi accusations, saying that Riyadh should not listen to “the corrupt princes of oppression” in UAE. Hamas said it was shocked by UAE’s stance.

In contrast, US president Donald Trump weighed in with a series of tweets on Tuesday backing Saudi Arabia and asserting that Qatar was funding terrorism, a claim it vehemently denies.

There were signs that Trump’s enthusiasm for the Saudi-UAE assault on Qatar has unnerved the Pentagon and European capitals. The serving US ambassador to Qatar also appearedto openly challenge Trump’s view that Qatar has been aiding terrorism.

France initially refused to take sides but urged Qatar to be fully transparent and answer the questions of its regional neighbours.

In an attempt to protect its economy, Qatar said it was talking to Iran and Turkey about securing food and water supplies to prevent shortages. Iran’s foreign minister, Mohammad Javad Zarif, also travelled to Turkey to co-ordinate a response.

Qatar’s government released a video on Tuesday that showed supermarket shelves stocked with food and other goods in an attempt to avert a repeat of Monday’s scenes of chaos, which were sparked by fears of shortages.

A government official said Doha had large strategic food reserves and that there was enough grain to last four weeks.

But Qatar’s isolation is disrupting trade in commodities from crude oil to metals and food, and is deepening fears of a possible jolt to the global gas market, where the tiny Gulf state is a major player. Qatar’s ports and airports remained open to trade on Wednesday with countries not taking part in the Saudi-led boycott, a government official said.

“We have no problem with food supplies,” Qatar’s foreign ministry said. “We have strategic reserves in place since 2014, we don’t see that life will be affected.”