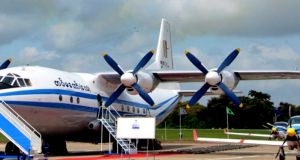 Ships and planes were scouring the coast of southern Myanmar on Wednesday after a military aircraft vanished over the Andaman Sea with 120 soldiers, family members and crew on board, the army and civil aviation officials said.

The Chinese-made Y-8-200F transport plane left the coastal town of Myeik at 1.06pm (7.36am Irish time), heading north to Myanmar’s largest city of Yangon on a regular weekly military flight that stops at several coastal towns along the way, officials said.

“We don’t know what exactly happened to this plane after the loss of contact,” said Kyaw Kyaw Htey, a civil aviation official at Myeik airport.

Civil aviation authorities initially said there were 105 people on board. The military later said those on board included 106 soldiers and their family members and 14 crew. The maximum capacity of the aircraft was 200 people, said a military officer.

It is monsoon season in Myanmar, but Kyaw Kyaw Htey said the weather had been “normal”, with good visibility when the plane took off.

The military launched a search soon after the plane went missing, mobilising six navy ships and three military planes, said the army in a news release. The search continued as darkness fell.

Some 300-400 people, including firefighters, medics, emergency and welfare officials, had gathered on the shore near the town of Launglon, close to the area where the navy search was concentrated, said Naing Myo Thwin, the chairman of the local funeral association, from the scene.

“We haven’t seen any trace of the plane yet,” Naing Myo Thwin told Reuters by telephone. He doubles as a member of the local hospital’s emergency team.

Aung Win, a local police officer also speaking from the scene by telephone, confirmed there were a large number of people gathered on the beach. He said because they had not found any trace of the plane they were moving to other areas along the shore.

The aircraft was bought in March 2016 and had a total of 809 flying hours. It was carrying 2.4 tons of supplies, the military said.

Aircraft incidents, both civilian and military, are not uncommon in the Southeast Asian country.

Five military personnel were killed last February after an air force aircraft crashed in the country’s capital Naypyitaw, according to media reports.