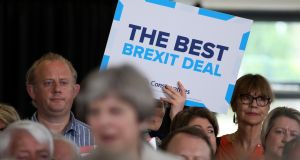 An attendee holds a placard reading ‘The Best Brexit Deal’ behind prime minister Theresa May, during a Conservative Party campaign event in Twickenham, London, on Monday. Photograph: Chris J Ratcliffe/Bloomberg

When he ran to be US president in 1968, Robert Kennedy questioned whether gross national product could measure American greatness while it counted napalm, cigarette advertisements, environmental ruin, “special locks for our doors and the jails for people who break them”.

He sensed the loftier needs of a rich but troubled nation. Within a decade, slow growth and extreme inflation put paid to such high-mindedness and gifted the West to free-marketers until, well, now.

When he became Britain’s prime minister in 2010, David Cameron said there was more to life than gross domestic product, and offered wellbeing as an alternative metric of success.

Within a year, his government was scrabbling around for economic growth wherever it could find some, its electoral prospects hinged to tenths of a percentage point in the quarterly data.

A post-economic world, where voters look past the material to nobler priorities, is always in the offing.

A smart politician should assume that the offing is where it will stay. The thought occurs because traces of that Kennedy-Cameron naivete – is it a trust-fund thing? – survives in Britain’s general election campaign.

Neither Theresa May, the Conservative prime minister, nor Jeremy Corbyn, her Labour opponent, answer to economic imperatives.

Both interpret the public anger of recent years as a cry for something more than the soulless quest for 2.5-ish per cent annual output expansion, damn the human consequences.

May wants a more familiar nation, a more British Britain. Corbyn wants a more equal and state-controlled one.

The Tories plan to replace immigration and European single-market membership with an industrial strategy that will not produce results, if at all, until well into the next decade.

They are relaxed about the lag because they believe that voters are willing to pay for the society they want – that Britain can be poorer but happier, like an exhausted bond trader who quits to brew artisanal ales in Devon.

In that belief lies the eventual rout of this generation of leaders. There is no evidence that voters are ready to bear a cost to live in their own version of Eden. Last year, a large majority told surveys they would not pay a single pound to cut European immigration. A similar percentage still either assume there is no choice to be made between migration controls and trade with Europe or, forced to choose, favour the trade.

The British did not brave the costs to vote for exit. They just did not believe there were costs. None of this suggests that buyer’s remorse about exit is imminent, but politicians who count on a new public tolerance of economic pain to get through the coming years are foolish and should fear signs of a slowdown.

It is fashionable to wave away GDP talk as an abstraction for elites who, in the sin of the times, “don’t geddit”. But those decimal-point movements translate into wage rises given or withheld, investments that generate returns or do not, public services that are funded or start to creak.

There was no populist momentum in, say, 2007, not even in the de-industrialised towns that seethe now. Growth was unequal but there was enough of it to keep unproductive parts of the realm in state largesse.

As official data exposed last week, the UK is a patchwork of deficit-running regions that are subsidised by London and its surrounds. Imagine if voters in those areas receive less generous transfer payments and inferior public services because of diminished growth in the capital.

Would they console themselves that at least their country was less globalised and that Londoners had some of the strut knocked out of them? Or would they become angrier? This is not a hard question.

May and Corbyn will deny indifference to growth and claim what they want is a fairer version of it. But the British will not happily weather a rough period on the way, especially if it is attributable to government policies. Any post-material consciousness is still confined to a sect. It is the politics of the retired asset owner and the too-rich-to-care bohemian.

Everyone else – the average-earner, the welfare claimant, the millionaire investor – is hair-trigger sensitive to fluctuations in GDP and the way prices relate to wages. The poorer-but-happier thesis has it the wrong way around. If anything, public anger stems from the crash and a recovery of historic slowness – from growth that is too weak rather than a will to transcend growth altogether.