Standard-bearers struggle to hold up their colours on windswept hillside

The battle of Messines during the first World War was a unique moment in Irish history, unionist and nationalist soldiers from Ireland fought alongside each other for the first time. Video: Enda O'Dowd 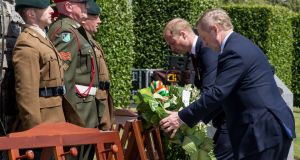 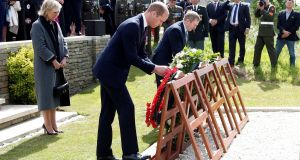 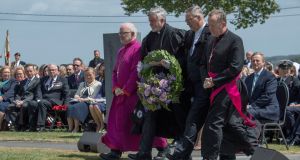 Church leaders from Ireland lay wreaths during a ceremony at the Island of Ireland Peace Park in Messines, Belgium to commemorate Battle of Messines Ridge. Photograph: Arthur Edwards/The Sun/PA 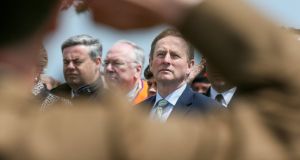 It seemed like the tall trees on the sunny windswept hillside at Messines were bending attentively to hear the music. The musicians too played valiantly through the gale that blew constantly through the Island of Ireland Peace Park, and the standard bearers struggled to hold up their colours.

Some 700 attended the commemoration of the battle which occurred here 100 years ago, when famously the 16th Irish and the 36th Ulster Divisions jointly and successfully fought their way up a neighbouring hill to take the ridge and tiny village of Wijtschate, a crucial strategic cornerstone of the offensive that became the ultimately disastrous Third Battle of Ypres.

It was a unity of purpose and potential for a common future that framed the day’s narrative, although some would say the case is oversold – at least, however, Messines, in this decade of multiple commemorations represents one important shared experience.

The Flanders ceremony was organised jointly by the Irish and British governments and wreaths laid by, among others, Taoiseach Enda Kenny, Britain’s Prince William, the Duke of Cambridge, and Belgium’s Princess Astrid.

Other wreath-laying honoured the memory of Willie Redmond MP who died on that day leading his men into battle, and also took in the small graveyard at Wijtschate where 1,000 of the day’s dead were buried and a Celtic cross honours the 16th.

It was sunny on that day too. But the attack was launched by the explosion of a series of massive mines that contemporary journalist Philip Gibbs would describe in apocalyptic dispatches read to the crowd yesterday: “The ground opened and mountains of fire rose into the clouds ... the most diabolical splendour I have ever seen in war. All the countryside was illuminated by red... Truly the earth quaked.”

Wednesday’s elaborate ceremony mixed military pomp – soldiers and veterans saluted as the colours of the Irish Defence Forces and Royal Irish Regiment paraded their colours – recollections and letters from the front, a specially composed piece, The Messines Suite, by Tracey McRory and Richard Laird, the poetry of Francis Ledwidge, and prayer of the “turning swords into ploughshares” variety.

“Dear Mother,” Lieut Michael Wall wrote, “In a short time we will be going over the top ... the men are in great form ... pray for my safety.” To no avail. His mother would receive the telegram that countless others did. Among the estimated 300 Irish guests present were the Minister for Foreign Affairs, Charlie Flanagan, Minister for Arts and Heritage, Heather Humphreys and Minister of State, Paul Kehoe, who all laid wreaths at the grave of Redmond.

Despite Thursday’s election, Northern politics was heavily represented too: the DUP’s Arlene Foster, Sinn Féin’s Alex Maskey and others, and the SDLP’s Dolores Kelly. The Northern Ireland Office was represented by Lord Dunlop.

In all, some 18 official wreaths were laid, including ones from the Australian and German governments, while many other groups of veterans or families laid their own.

Representatives of Irish regular veterans and of UN operations attended as did those of old comrades associations for the Connaught Rangers, the Leinster Regiment, the Dublin Fusiliers, the Munsters and others, protesting strongly that the highly choreographed ceremony did not make room for their standards.

“ ‘Health and safety’ we were told,” a sceptical Paul Malpas of the Connaught Rangers complained “Politics!” What politics was not entirely clear.

Charlie Flanagan said the occasion was an important and moving one whose symbolism for the ongoing process of North-South reconciliation was crucial.

In insisting that the time had come for Ireland to give “full and due recognition” to such sacrifice as part of “our history”, he echoed the words of the poet Lord Dunsany to the disregarded Great War dead of Ireland: “Sleep on forgot, a few more years and then/ The ages that I prophesy shall see/ Due honours paid to you by juster men.” In Messines due honours were paid.

1 Funeral of John Hume hears peacemaker ‘gave dignity and life to so many people’
2 Irish in Canary Islands: Life has changed dramatically
3 Fresh investigation into the murder of Michaela McAreavey in Mauritius
4 NPHET calls for ban on non-essential travel from countries with high Covid-19 rates
5 Restaurateurs say new 11pm closing time is ‘a body blow’ to sector
Real news has value SUBSCRIBE