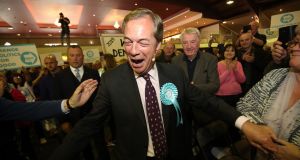 Brexit Party leader Nigel Farage during his walkabout while on the European Election campaign trail in Durham on Saturday. Photograph: Danny Lawson/PA Wire

The Opinium poll for the Observer shows support for the Brexit party in the upcoming European elections has soared to a level higher than for the two main parties put together.

The Opinium survey places the Brexit party on 34 per cent, when people were asked how they intended to vote on May 23rd, with Labour slipping to 21 per cent and the Conservatives collapsing to just 11 per cent.

Ominously for Mrs May, support for the Tories at the European elections is now less than a third of that for Mr Farage’s party, and below that for the Liberal Democrats, who are on 12 per cent.

The poll suggests the Brexit party, launched only last month, is now on course for a thumping victory that MPs fear will see Mr Farage use to support his argument that the UK must leave the EU immediately without a deal.

There are signs of mounting panic and recriminations in both Tory and Labour ranks as their MPs attempted belatedly to mount “stop Farage” operations.

The Opinium poll also makes grim reading for the Tories and Labour when voters were asked how they would vote at a general election. Labour is on 28 per cent, while the Tories are on 22 per cent, just one point ahead of the Brexit party on 21 per cent.

A second poll, the ComRes survey of voting intentions in a general election published in the Sunday Telegraph, shows the Brexit Party has overtaken the Tories for the first time and Mr Farage’s party is one point ahead of the Conservatives in what would be the Tories’ worst election result.

That level of support would see the Brexit Party win 49 seats, becoming the UK’s second biggest party after Labour, with 137.

Andrew Hawkins, the chairman of ComRes, described the poll as a “disaster” for the Tories, adding: “If the Conservative leadership contenders are not careful, there will be no party for them to lead.”

The polls follow the calamitous council elections, where Tory leader and British prime minister Theresa May oversaw the loss of nearly 1,300 Tory councillors and comes ahead of a predicted wipe-out in the European elections in the next fortnight.

And Labour would take seats from Boris Johnson, Iain Duncan Smith and Sir Graham Brady, the chairman of the 1922 committee, with the Tories retaining support from less than half of those who voted for them in 2017.

If the poll results were replicated in an election Labour leader Jeremy Corbyn would be able to lead a minority government with 27 per cent support, leaving the Brexit Party with 20 per cent and the Conservatives 19 per cent support, according to the poll commissioned by Brexit Express.

Brexit Express is a campaign group run by Jeremy Hosking, a major Tory donor who has now given £200,000 to Mr Farage’s party.

Adam Drummond, head of political polling at Opinium said it was “remarkable” the new party could be on the cusp of overtaking the party of government.

Although Mr Drummond cautioned the European election in less than two weeks could be “bleeding into” and “inflating” the Westminster results, the level of support was still notable.

The rise in support for Mr Farage’s party raises new doubts about how long Mrs May can survive as Tory leader, as pressure mounts on her from her own backbenchers to step down.

Cabinet ministers say the party is haemorrhaging support, with Leavers flocking to Mr Farage’s party and Tory Remainers either saying they will refuse to vote or back another party.

In an attempt to show that Mrs May still believes a Brexit deal is possible, Downing Street said on Saturday night that talks between the government and Labour would resume on Monday afternoon.

Then the government intends to explore with the EU when it might discuss changes to the political declaration that have been under discussion with Labour, including those relating to customs arrangements, workers’ rights and environmental protections.

Opinium Research carried out an online survey of 2,004 UK adults over 18 years old between May 8th and 10th and the results have been weighted. - PA/Guardian