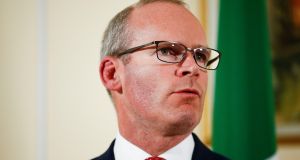 British politicians should not imagine that a change of prime minister will resolve the Brexit deadlock, Tánaiste Simon Coveney has said. Photograph: Henry Nicholls/Reuters.

British politicians should not imagine that a change of prime minister will resolve the Brexit deadlock, Tánaiste Simon Coveney has said.

“The issues don’t change and the arithmetic at Westminster doesn’t change so for us this isn’t about personalities,” he told journalists on his way out of a foreign ministers’ meeting in Brussels on Monday.

“It’s about facts and the complexities of Brexit and trying to protect EU interests and Irish interests and also to respect and accept UK interests as well in all of this.”

Senior member’s of Theresa May’s Conservative Party on Tuesday said she should trigger a leadership contest to replace her as the party braces for a poor showing in the European elections later this month.

Ministerial aide Huw Merriman said the party faced a “mauling” as an opinion poll suggested the Conservatives could slump to fifth place in the contest, which is taking place because Mrs May’s efforts to win approval for a Brexit deal have been repeatedly defeated.

Nigel Evans, executive secretary of the 1922 Committee of Tory backbenchers, told the Press Association he wanted Mrs May to fire the starting gun on the contest to choose a new leader.

Mrs May is safe from another confidence motion until December following last year’s botched coup attempt, but the committee could change its rules to allow another challenge if she fails to convince members to back her position.

Mr Coveney said the central problem in finding a solution to the Brexit stalemate was an unwillingness among some on the British side to accept the idea of compromise.

“The UK needs to make its mind up now as to how it approaches the Brexit process...Everybody has to be willing to compromise . The problem is that some of the UK side don’t seem to be willing to do that,” he said.

Mr Coveney would not be drawn on his attitude to a second referendum or “confirmatory vote”.

“I’ve been very careful in recent weeks not to prescribe a way forward. The British political system has to,” Mr Coveney said.

“And what Keir Starmer and those negotiating with him, and David Lidington on the other side, are trying to achieve is a middle ground position that can get majority support in the Labour Party and in the Conservative Party to command a majority in Westminster and that is what we would like to see happen .”

In the UK, he said “the two main parties left it until very late in this process to talk seriously to each other . They are now though, and so we want to see that process produce some certainty because in the absence of agreement between the Labour Party and the Conservative Party on a way forward, it’s anybody’s guess as to where the Brexit debate in Britain goes after that.” - Additional reporting: PA