May under pressure to abandon Labour talks as poll spells trouble 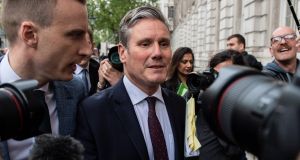 Labour’s Brexit spokesman Keir Starmer: has said Labour could agree to a deal only if it included a confirmatory referendum. Photograph: Chris J Ratcliffe/Getty Images

Theresa May’s cabinet will consider on Tuesday whether to continue Brexit talks with Labour as a new poll spelt trouble for both main parties ahead of next week’s European Parliament elections.

“Talks continued tonight and the shadow cabinet and the trade unions will be updated on what has been discussed,” a Labour Party spokesman said.

Downing Street characterised the negotiating session as a stocktaking meeting rather than one that moved the talks forward.

“In preparation for an update to cabinet tomorrow, today’s meeting took stock across the range of issues discussed in talks over the last few weeks. We continue to seek to agree a way forward in order to secure our orderly withdrawal from the EU,” a spokesman said.

Mrs May is under pressure from Conservative MPs to abandon the talks as her party leaches support to Nigel Farage’s Brexit Party, which is on course to top the poll in next week’s elections. A YouGov poll on Monday put the Brexit Party on 34 per cent with the Conservatives in fifth place on 10 per cent.

The Brexit Party commands the support of two out of three voters who backed Brexit in 2016 and almost 60 per cent of those who voted Conservative in 2017 say they will vote for Mr Farage’s party next week.

Labour’s deputy leader Tom Watson on Monday followed shadow Brexit secretary Keir Starmer in suggesting that Labour could agree to a deal only if it included a confirmatory referendum.

But Stephen Kinnock, a Labour MP who advocates a soft Brexit that would see Britain remaining in the single market and customs union, said demanding a referendum could collapse the negotiations.

“What would be a real shame is if the talks are failing because they are being torpedoed by an additional red line that Labour is bringing in around a second referendum,” he told the BBC.

“If you try to insert a second referendum into these talks they won’t get through because the Conservatives will not whip their MPs to support it.”

Foreign secretary Jeremy Hunt said in Brussels ahead of a meeting of EU foreign ministers that the Conservatives could not agree to a second referendum.

“From the Conservative point of view, we have always said that would be a betrayal of what people voted for and we want to implement the first referendum,” he said.

If the government concludes that it cannot agree a common position with Labour, sources said it would seek to find a version of Brexit that commands a majority in parliament through a series of votes.

Unlike the “indicative votes” earlier this year that failed to produce a majority for any option, these votes would be conducted in an exhaustive process, perhaps using a single transferable vote system.