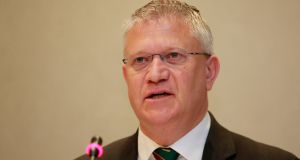 Andrew Rosindell: ‘A completely fresh start is needed, and this time it will be a different type of negotiation.’ Photograph: Nick Bradshaw

For a time, it seemed like the most contentious issue at the British-Irish Parliamentary Assembly this week might be Lord Kilclooney complaining that there was no union flag flying outside Druids Glen.

The former Ulster Unionist MP, perhaps better known as John Taylor, noted the missing flag as Irish and British parliamentarians gathered for a “family photo” in front of six flagpoles at the Co Wicklow golf resort.

“This is a meeting of UK parliamentarians and Irish parliamentarians, and normally when you are visiting a country you are welcomed. There are many other flags there but not the union flag,” he told The Irish Times.

Pro-Brexit Conservative MP Andrew Rosindell, co-chair of the assembly, was overheard saying in jest that perhaps they could replace the European Union flag with the union one.

Given the number of Brexiteer MPs who crossed the Irish Sea for the 58th assembly, it felt bizarre that Brexit – and the crisis it has caused in the British political establishment – did not figure until late in proceedings on the first day, Monday.

But when it was discussed, the damage to the public’s trust in parliamentary democracy over Brexit ranked alongside similar fears over the failure to restore powersharing in Northern Ireland.

Tory MP Vicky Ford – the former MEP who grew up in Omagh, Co Tyrone – raised concerns about the failure to break the impasse over UK prime minister Theresa May’s Brexit deal at Westminster and called for a greater understanding of why people objected so strongly to the “backstop” to avoid a hard Irish border after Brexit.

Like other MPs in Co Wicklow this week, she talked about the importance of moving forward with the Brexit process. “Otherwise I fear for the trust in democracies right across the UK as well as over here,” she added.

A general view expressed by the Brexiteer MPs on the fringes of the assembly was the need for a new approach, a new British leader and new Brexit negotiations.

“A completely fresh start is needed, and this time it will be a different type of negotiation. A new prime minister will have to come in and lead us in a very different but a much stronger direction,” said Rosindell.

May’s deal was “dead”, he said, while another referendum on the UK’s membership of the EU was a “dead duck”. He repeated the Brexiteer theory that former taoiseach Enda Kenny’s handover of power to Leo Varadkar marked a change in Irish policy on Brexit, while Kenny might have been more conciliatory on the Border issue.

The stalemate over the Border was “a red herring from day one” and an issue that should have been left to the British and Irish to resolve, said Rosindell, the MP for Romford in northeast London.

“I know Mr Varadkar has felt an imperative to go along with Brussels on this because Ireland is part of the EU, but this is not going to work,” he said.

“The only way this will work is if Dublin says to the European Union, ‘We will now work on a bilateral basis with the United Kingdom because that does work.’ I just think we can do better together.”

Pro-Brexit Tory MP Martin Vickers argued that, notwithstanding Dublin’s objections, a two-year time limit on the backstop would have eased Conservative fears that it might be “never-ending” and broken the deadlock.

“Enough people on the Conservative side would have come on board who would have previously objected to the agreement,” said Vickers, who reluctantly voted for May’s deal to try to end the stalemate.

He warned that any insistence by British Labour on a “confirmatory referendum” on the deal arising out of the current cross-party talks with the Tories would be “incredibly damaging to the whole democratic process”.

Nigel Mills, a Conservative MP from Derbyshire and another Eurosceptic, set out a menu of potential outcomes: a new Tory leader who will try to “fix the withdrawal agreement”; a general election; and for the UK to exit without a deal by the next deadline on October 31st or a long extension to find a solution in trade talks.

The Border issue would only be solved with finding “a way out of this that everyone can live with”, and not push this to the final choice of leave without a deal or don’t leave at all”, said Mills.

If Labour and Conservatives struggled to win 30 per cent of the vote in next week’s European elections – as a weekend poll in Britain suggested – that would tell the two parties “to do something different and do it quick”, he said.

Neil Hamilton, leader of the Welsh branch of the UK Independence Party (Ukip) – better known for being caught in the cash-for-questions political scandal of the 1990s – said the UK needed a pro-Brexit prime minister “who will produce the result that the people voted for”.

He said there had to be a general election and a “thorough-going cleanse of the political system” to remove Remain MPs who, he said, were in the majority at Westminster but “don’t want what the people voted for”.

“What has happened in Britain is the collapse of the traditional British culture so it has now turned itself into a much, much bigger crisis than just Britain’s relationship with the EU,” he said.

“It has turned into a crisis of the British people’s relationship with its own parliament.”

Against this backdrop, one member of the House of Lords who travelled to Co Wicklow this week, Robin Bridgeman, noted the importance of the assembly as Ireland faced “a nightmare scenario” with Brexit.

“This assembly, which has achieved so much in constructive dialogue, has an absolutely vital role in the times ahead,” said the Conservative peer.