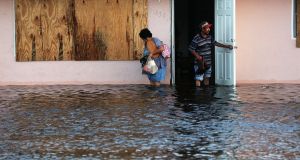 A couple leave their flooded home in Fort Myers, Florida on Monday after Hurricane Irma swept through the area. Photograph: Spencer Platt/Getty Images 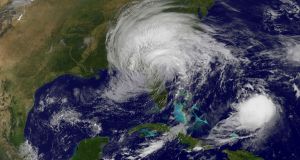 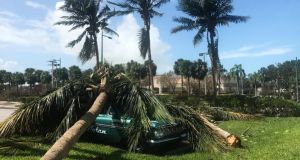 A palm tree lies on top of a 1959 Chevy in the wake of Hurricane Irma in Marco Island, Florida, US. Photograph: Brian Thevenot/Reuters 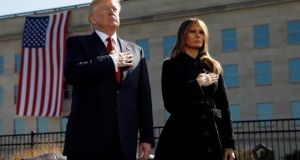 Recovery efforts got under way in Florida on Monday as the sunshine state began to count the cost of Hurricane Irma, which battered the southeast corner of the United States on Sunday and Monday.

As rain and flash flooding continued to strike northern Florida and Georgia, the governor of Florida Rick Scott said it would “take some time” before people could return to their homes.

“Power lines are down throughout the state. We’ve got roads that are impassable, so everybody’s got to be patient as we work through this,” he said during an aerial tour to survey the damage.

The Florida Keys, the first region to be hit by Hurricane Irma on Sunday, remained one of the most badly-affected areas, with officials warning that the Keys could be facing a “humanitarian crisis”.

While the region remains cut off from the mainland, footage showed many buildings in ruins and widespread flooding, though no fatalities have been reported.

Tom Bossert of the Department of Homeland Security told reporters in the White House that the Keys could be cut off for regular citizens “for weeks” as bridges which connect the collection of islands with the mainland are inspected for safety.

Jacksonville, in the north of the state, remained under high alert, with water levels in the St Johns river rising rapidly, after the city found itself unexpectedly in the storm’s way over Sunday night.

Tampa, on the west coast of the Florida peninsula, was spared much of the damage, despite the fear of enormous storm surges from Hurricane Irma, which made landfall for a second time on Sunday just south of the city.

“Not only did we dodge a bullet, but we survived pretty well. Not a lot of flooding. Tree removal, debris – don’t want to say it’s negligible, but it’s manageable,” the mayor of Tampa, Bob Buckhorn, said.

While the sun shone in Miami, emergency teams went to work in the early hours of Monday morning to survey the damage, which saw businesses and homes flooded and streets turn into rivers. Three-quarters of the city remained without power and several people had been arrested for looting.

Irma, which hit the state as a category-four hurricane shortly after sunrise on Sunday morning, was downgraded to a tropical storm on Monday, as the hurricane weakened on its journey north, sparing the state from further damage.

But the damage was widespread, with 6.5 million homes and businesses without power in Florida on Monday. While 19,500 workers had been sent out to begin the reconnection efforts, Florida’s state utility provider said it may take weeks to restore power to some areas, though the eastern coast of the state is likely to see power return “within days”.

At least four people are believed to have lost their lives as a result of the storm in Florida.

Speaking at a ceremony at the Pentagon to mark the 16th anniversary of the September 11th terrorist attacks, president Donald Trump pledged the full resources of the federal government to help those affected by the recent flooding.

“These are storms of catastrophic severity and we are marshalling the full, full resources of the federal government to help our fellow Americans in Florida, Alabama, Georgia, Texas, Louisiana, Tennessee and all of those wonderful places and states in harm’s way,” he said.

“When Americans are in in need, Americans pull together. And we are one country. And when we face hardship we emerge, closer, stronger and more determined than ever.”

The United States government had sent the “biggest flotilla” in US history, including nine ships, to the Caribbean to help the residents of Puerto Rica, the US Virgin Islands and other islands, Mr Bossert said.

Meanwhile, the Cuban government announced that 10 people had lost their lives as a result of Hurricane Irma which hit the island late Friday and Saturday, bringing waves of up to 35ft in its wake. The Cuban death toll brings the total number of fatalities from the hurricane to 37.

Britain has sent more than 700 troops to the Caribbean to help with the relief efforts in British territories which have been devastated by the hurricane.